The Capital Region regained more than 8,000 jobs in 2021 but four times that amount is still needed to return the eight counties to their pre-pandemic employment level. And although restaurants and bars were the biggest gainers of jobs in 2021, they also continued to sustain the heaviest losses since before the pandemic, according to a Center for Economic Growth analysis of new Quarterly Census of Employment and Wages (QCEW) data from the New York State Department of Labor.

In 2021, 45 Capital Region industries experienced annual growth, led by food services and drinking places (+3,374), administrative and support services (+1,756), warehousing and storage (+1,354), ambulatory healthcare services (+1,045) and accommodation (+1,033). Twenty-three industries were larger than they were before the pandemic in 2019. They included warehousing and storage (+1,560), couriers and messengers (+997), ambulatory health care services (+924), chemical manufacturing (+534) and electrical equipment and appliances manufacturing (+369). 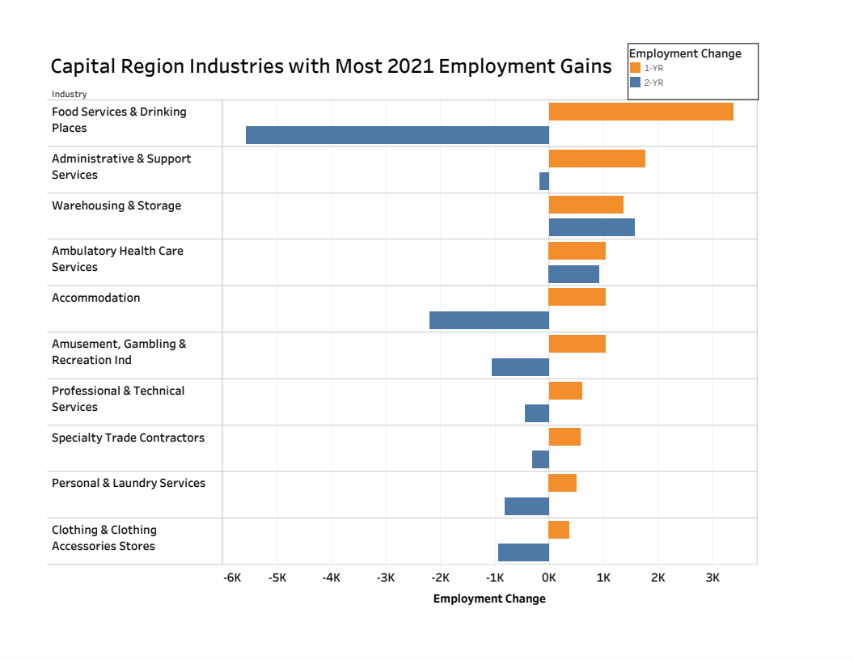 Compared to pre-pandemic levels, job losses remained heaviest in food services and drinking places (-5,563), local government (-4,023), state government (-2,924), and hospitals (-2,627). Retirements may be a significant factor behind the public sector declines. The Capital Region saw a 10.7 percent increase in New York State Local Retirement System new retirees in 2021 and an 18.5 percent increase in New York State Teacher Retirement System new retirees in 2020. The decline in food services and drinking places came despite that industry leading the Capital Region in year-over-year job growth and an $89 million infusion throughout the eight counties from the Restaurant Revitalization Fund. The region’s number of food services and drinking employer establishments places increased by 12 to 2,936 in 2021, though that was 43 fewer than 2019’s total.

Average wages for all industries were up 6.5 percent over the year to $65,126, but that was driven by public sector gains. Private sector wages rose by 3 percent, compared to the statewide average of 5.6 percent and a U.S. average annual inflation rate of 4.7 percent. State government led the region for average annual wage growth, increasing by 35.2 percent to $96,440. Retroactive salary increases Public Employee Federation (PEF) members for 2019, 2020 and 2021 paid out last November likely drove average wages in that industry. Regionwide, total wages rose by 8.8 percent to $29.8 billion. State government also saw the region’s largest increase in total wages: $1.1 billion to $4.7 billion. The fastest-growing industry for total wages was performing arts and spectator sports, which increased by 47.5 percent to $60.7 million.