Capital Region food service and drinking places last year received more than $89 million from the Restaurant Revitalization Fund (RRF) to help them continue operating during the pandemic. Almost half of the awardees used some of that funding for outdoor seating accommodations, and Saratoga County saw the largest influx of relief aid, according to a Center for Economic Growth (CEG) analysis of new data from Empire State Development.

During the spring of 2021, the U.S. Small Business Administration (SBA) awarded 436 RRF grants to restaurants, bars, caterers and other food service and drinking places in the eight-county Capital Region. The RRF was established under the American Rescue Plan Act, which was enacted on March 11, 2021 and appropriated $28.6 billion to the SBA for this relief initiative. At 138 grants, nearly a third (32 percent) of the RRF awardees were in Albany County. Saratoga County had the second most grants: 97 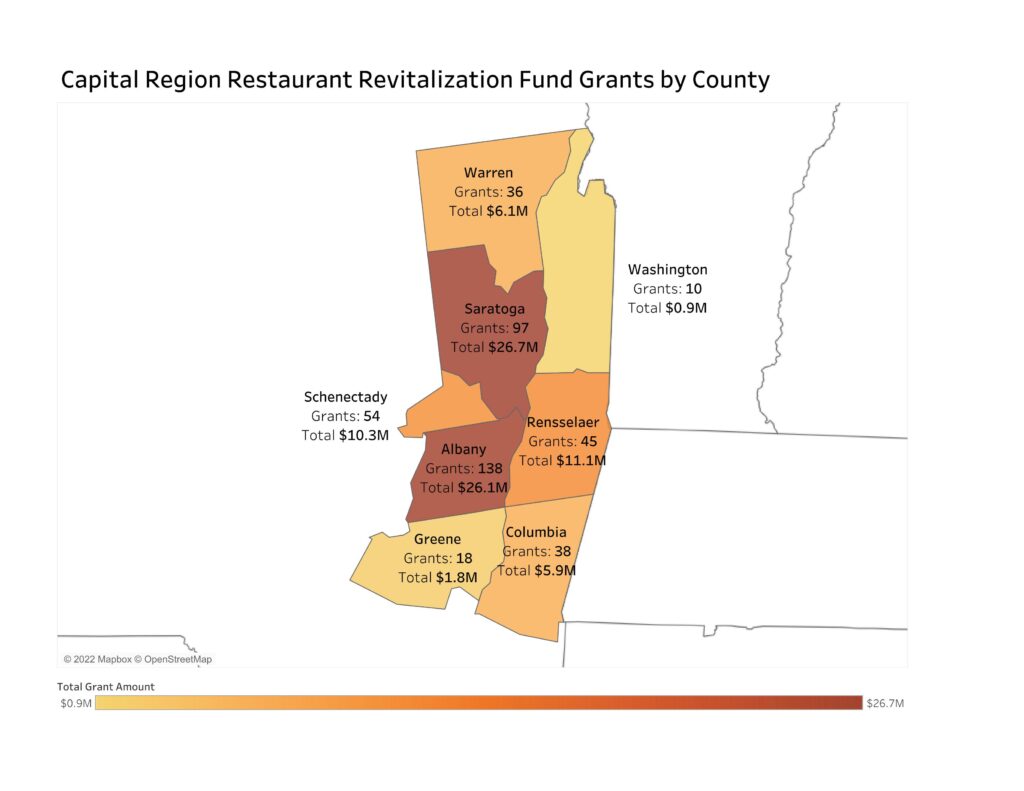 Payroll and utility payments were the most popular purpose for the grants in the eight-county region, with 93 percent of awardees devoted fund to them. The funding also supported outdoor seating among 43 percent of grants and indoor maintenance among 77 percent. More than half (53 percent) of the businesses that used RRF funds for outdoor seating were in Albany and Saratoga Counties. 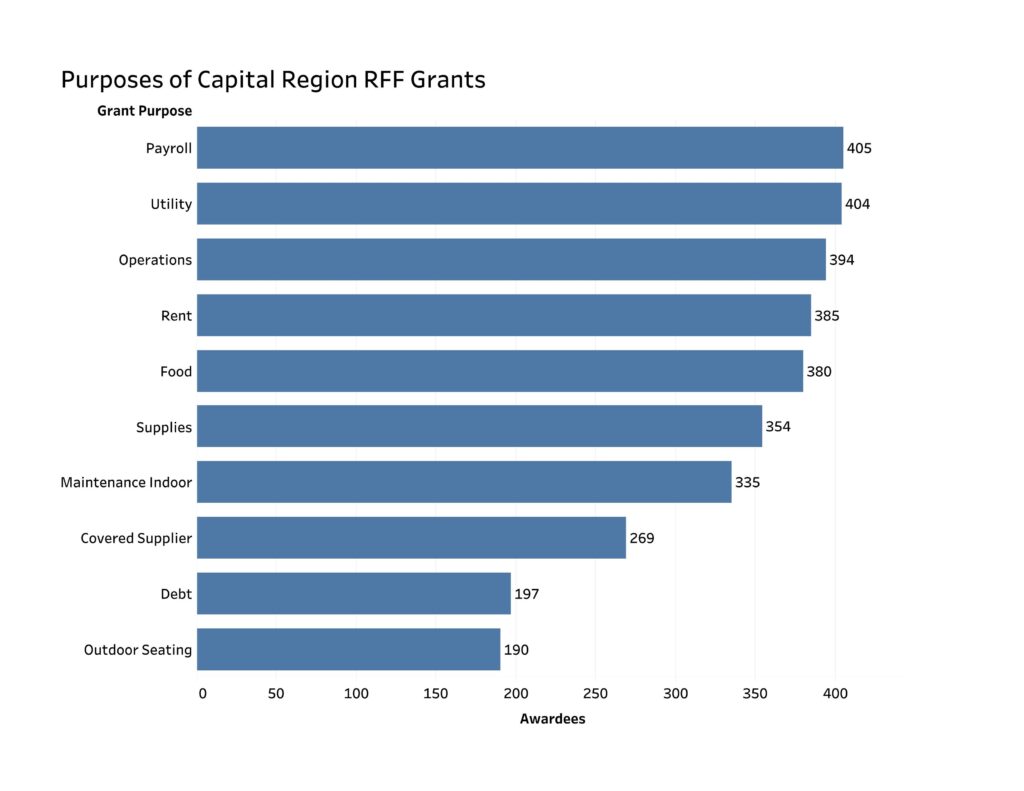 The RRF was open to businesses that were not permanently closed and that primary served food or drink. Among the awardees, 59 percent were restaurants. Alcoholic beverage drinking places, such as bars, brewpubs and breweries, accounted for another 17 percent of the number of grants. Caterers accounted for 7 percent of grants in the region and mobile food services, such as food trucks or food stands, accounted for 13 percent. 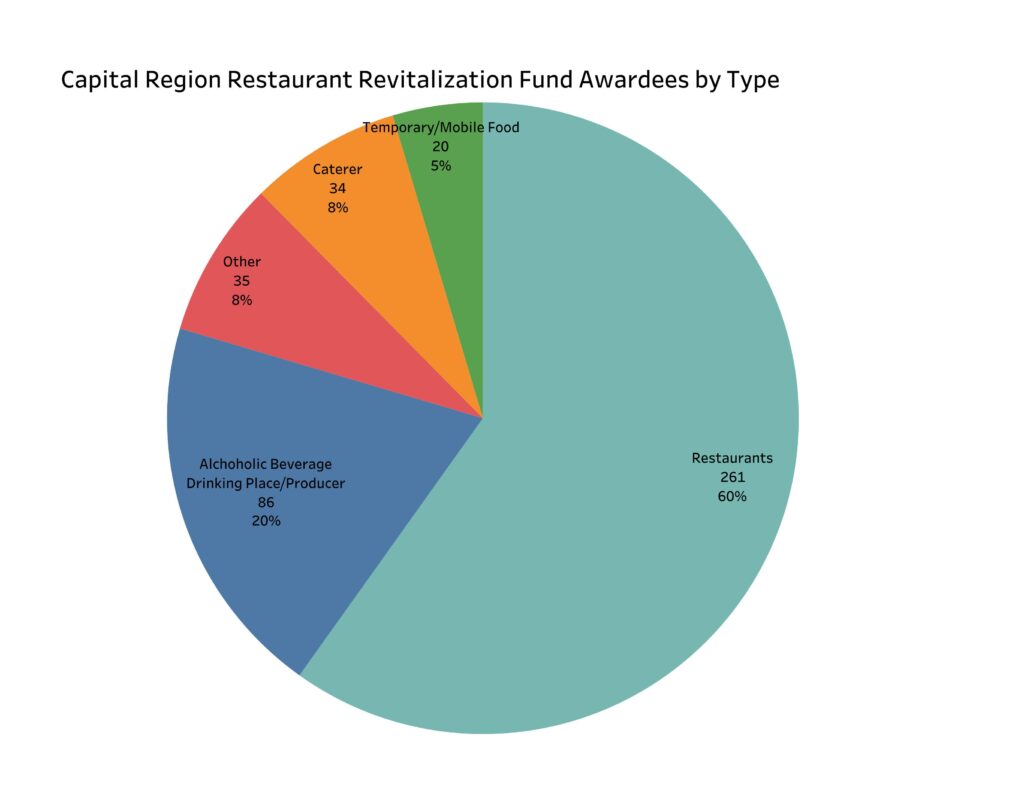 Restaurants, bars, breweries and food trucks all add to the Capital Region’s vibrancy and make it a place where skilled workers want to live and work. The RRF grants helped Capital Region restaurants, bars and caterers tackle many of the financial and operational challenges posed by the pandemic. During the pandemic’s first summer (Q3 2020), employment in the industry fell over the year by 9,270, or 25 percent. Fifty-seven food service and drinking places were lost. But boosted by the RRF, Capital Region employment in the food service and drinking places industry last summer increased by 18 percent to 33,350.

An abundance of restaurants – including farm-to-table and other artisan – contribute to the Capital Region’s quality of life that is important to attracting and retaining talent. In fact, the Glens Falls metro area (Warren and Washington counties) has the 10th highest number of food service and beverage places per capita among 381 metropolitan statistical areas (276 per 100,000), based on a CEG analysis of 2018 data from the Census Bureau and U.S. Bureau of Labor Statistics. In April 2021, CEG launched the CapNY brand with the associated GoCapNY.com website, which markets New York’s eight-county, million-resident Capital Region as a destination of choice, specifically highlighting its quality of place. Included in this are many articles highlighting the diversity of Capital Region restaurants. The Capital Region Chamber also offers several programs that can support local restauranteurs and caterers, including BusinessU, Entrepreneur Boot Camp, Micro Loan Programs, and Minority & Women-Owned Businesses support.