ALBANY, NEW YORK – The Capital Region is seeing a spike in retirements and in households with retirement income, according to a Center for Economic Growth Analysis of new data from the U.S. Census Bureau’s American Community Survey (ACS) and New York State retirement systems.

The new retirement statistics shed light on the labor force challenges employers in the Capital Region and beyond are encountering. The region’s growing ranks of retirees are putting pressure on employers to replace senior and middle-skill workers, making apprenticeship programming even more vital for economic growth and sustainability.

“Employers always knew their baby boomer employees were going to retire sooner or later. When COVID compelled many of them to retire sooner, employers found themselves scrambling to replace highly skilled senior workers, and apprenticeship programs can really help bridge that skills gap within a company,” said CEG President and CEO Mark Eagan.

“Like many organizations, Espey is continuously looking at our succession planning to fill positions that will open due to our workforce retiring. In 2019 and 2020 we had two long-term employees, with more than 40 years of experience each, retire in our machine shop,” said Espey Mfg & Electronics Corp. Human Resources Manager MaryClare Crandall. One was a welder and one a CNC computer programmer operator. We have been able to utilize the apprenticeship program to backfill these key roles. Through our mentors, on the job training and the educational component, the apprenticeship program has been extremely valuable to us to pass on the knowledge and hands on training for the next generation of employees at Espey.” 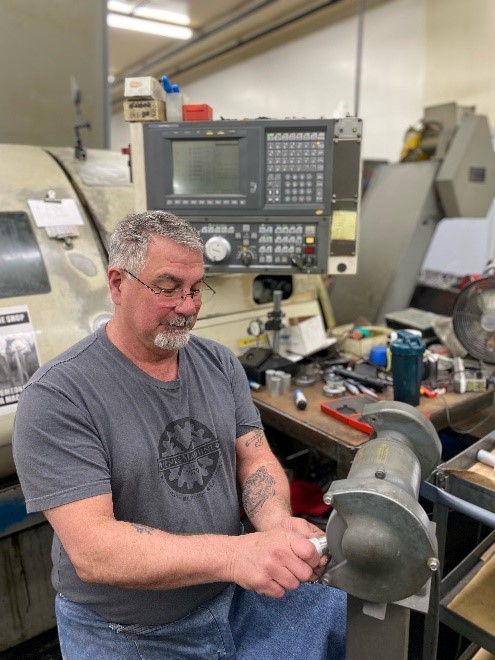 “Jenks Machine is a small, family-run machine shop with a crew of many employees that are coming to retirement age,” said Sarah Jenks, the human resource manager for Jenks Machine & Tool Co. in Hudson Falls. “We don’t want them to leave before they share their knowledge, expertise and skills with the next generation. Apprenticeship brings young people into the industry where they can learn skills from those who have been here for years. It can be hard to bring people into this field and apprenticeship is a bridge that makes a huge gap smaller. Programs like apprenticeship are how we get young people interested in hands-on manufacturing. We are super grateful for New York State recognizing this need and allocating funding to support the manufacturing industry with programs like apprenticeship. It is very foreword- thinking. Protecting the local and national manufacturing industry is essential for our future as a state, and a country.” 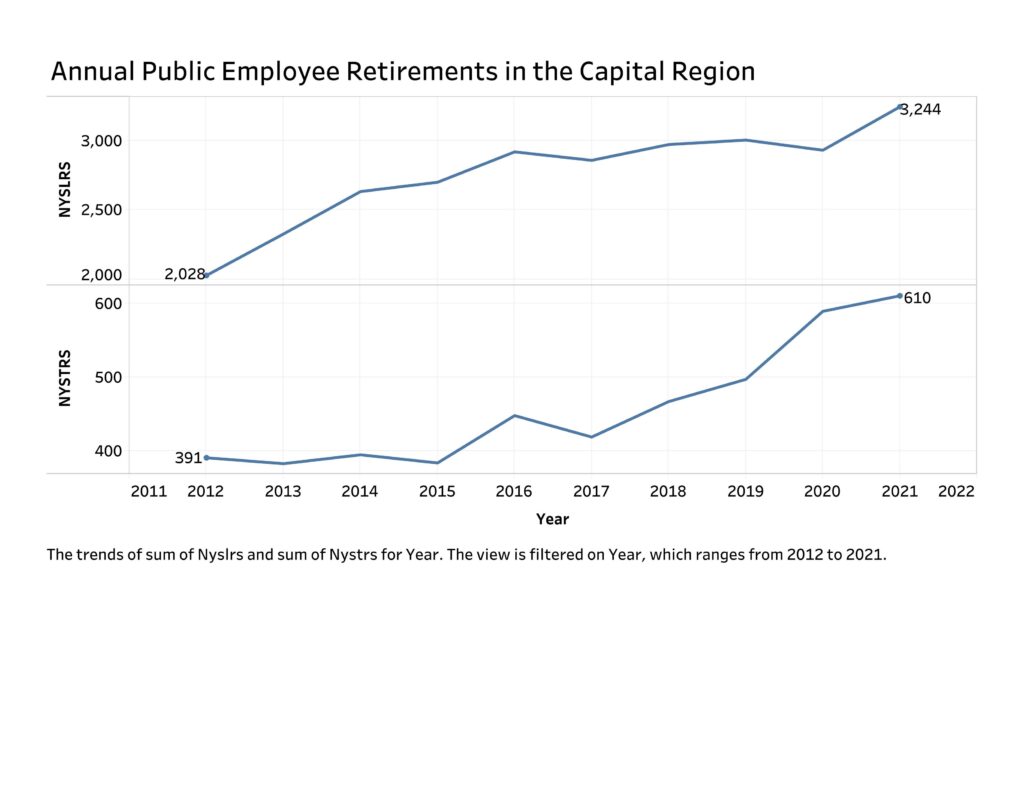 Over the last five years, the growth of NYSLRS new annual retirees has been fastest in Columbia (29 percent), Albany (22.2 percent) and Rensselaer (20.8) counties. The number of new retirees during that period declined in Warren County (-17.6 percent) and was only up marginally in Washington County (0.8 percent) and Schenectady (3.4 percent) counties.

During the 2016-2020 period, there were an estimated average 118,533 households in the Capital Region with an aggregate $3.6 billion in retirement income. When compared to the 2011-2015 period, households with retirement income were up 18 percent, whereas they had increased by only 4.1 percent from the preceding five-year period (2006-2010). 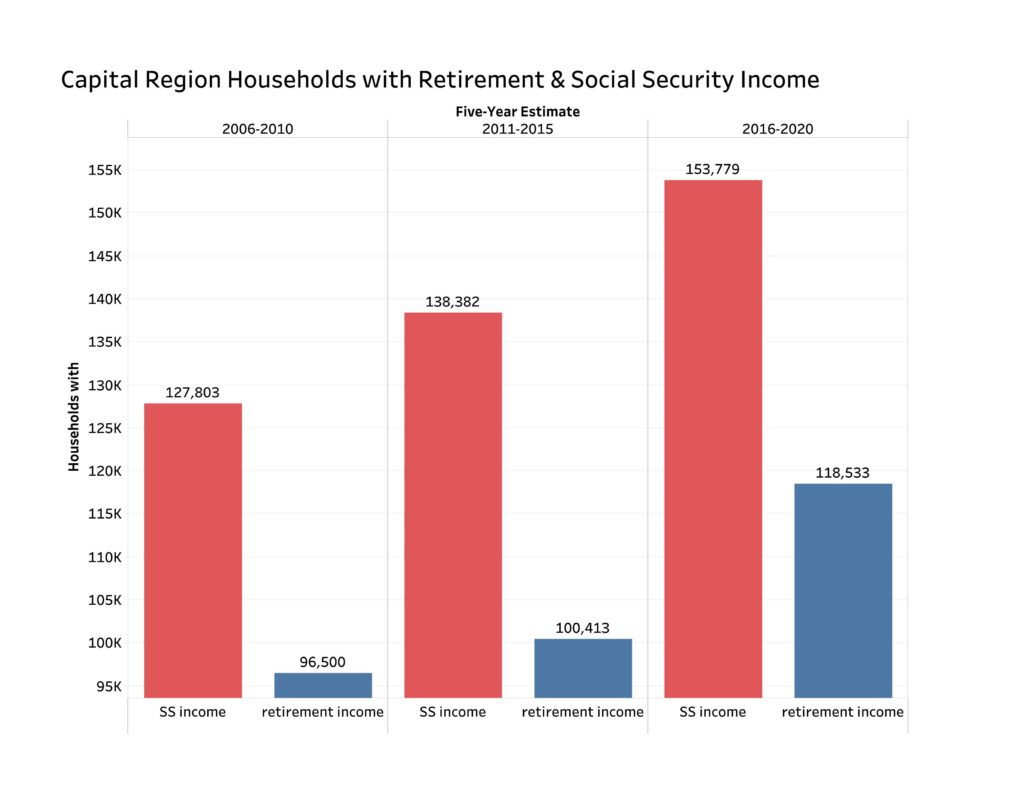 One-year ACS estimates for 2020 are not available and will only be experimental when released later this year by the Census Bureau. One-year estimates are also not available for Capital Region counties with populations below 65,000, such as Greene and Washington. However, one-year estimates for the Albany-Schenectady-Troy metropolitan statistical area (MSA) show households with retirement income spiked 31.8 percent in the year before the pandemic, 2019. 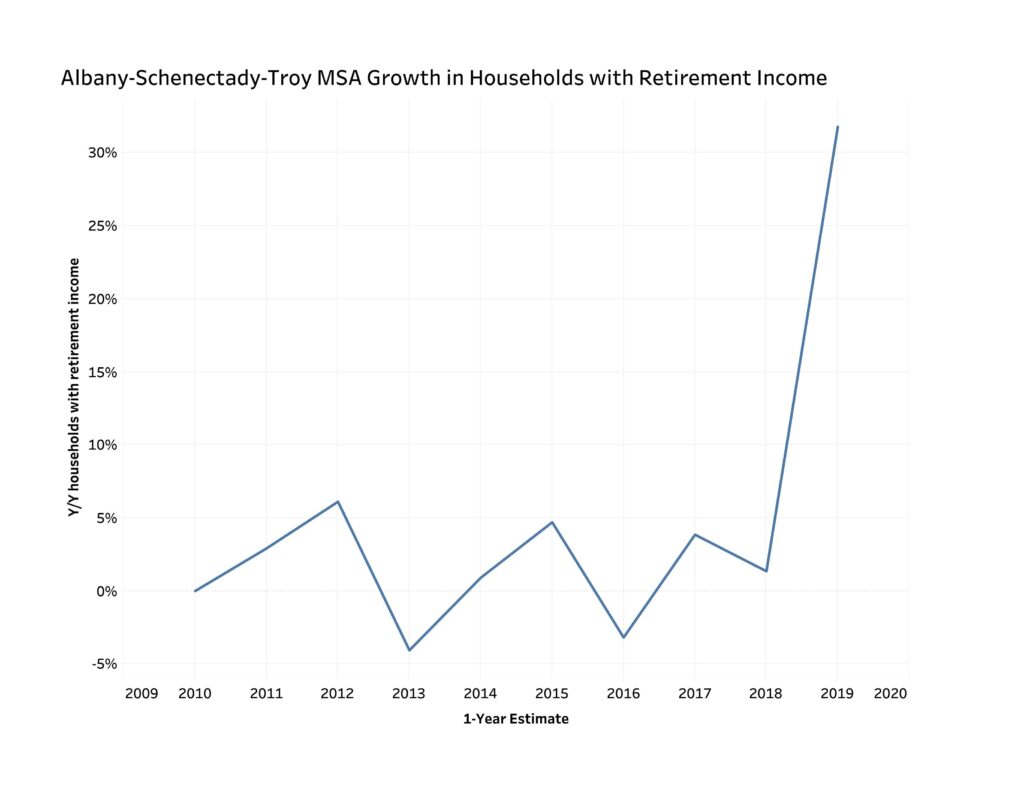 Retirements are contributing to downward pressures in the regional labor force. When compared to the pre-COVID statistics of 2019, the Capital Region’s labor force in 2021 contracted by 0.1 percent – the second smallest decline in the state among the 10 Regional Economic Development Council regions.

To help Capital Region manufacturers and software firms overcome these labor force challenges, especially in regard to filling mid-skill positions, CEG serves as the group sponsor for several  apprenticeship programs for the following trades: