The Capital Region’s Digital Gaming Cluster is emerging not only as the developer of some of the industry’s biggest titles but also a leading innovator of patented video game technologies. In the last three years, the region has doubled its number of video game-related patents that list local inventors, according to a Center for Economic Growth (CEG) analysis of data from the U.S. Patent and Trademark Office (USPTO).

Most of those patents were assigned to Activision Publishing, a subsidiary of Activision Blizzard and the parent company of the region’s largest studio: Vicarious Visions in Colonie. However, another large and newer studio in Troy, Velan Studios, last May received its first patent. Local inventors for IBM and startups, such as Network Next and iPACES, are also driving up the Capital Region’s tally of video game patents.

“It’s incredibly important for video game studios in the Capital Region to create, develop and own intellectual property for long term health and success,” said Velan Studios CEO Karthik Bala. “This is true for the tiniest of startups to established studios and spans new game IP, technology and patents. In particular, new growth sectors such as VR & AR that blur the lines between physical and digital play with unique use of hardware and software is ripe for innovation. New patents in this area may be rooted in gaming technology, but have the potential to transform the world in much broader ways.”

“Today, more than ever, the speed of technology is blindingly fast. However, fast as it is, it’s not as fast as our ability to have new ideas. By protecting our ideas with patents, we can guarantee that our creative people and their companies hold the rights to bring their ideas to the public,” said Blizzard Entertainment Game Design Director Rob Gallerani.

“The Capital Region is increasingly known not only for helping to create some of the world’s most successful video games, but also for the innovative technology that helps to drive the industry and opens up new possibilities that previously did not exist. Given the potential future impact of emerging technologies such as augmented, virtual and mixed realities, the Capital Region’s Digital Gaming Cluster has positioned itself as a leader in this unique space by leveraging expertise in hardware development, software integration and networking services,” said Michael Leczinsky, a professor of practice at the University at Albany’s College of Emergency Preparedness, Homeland Security and Cybersecurity.

While the content of video games, such as storylines and code, are generally covered by copyright laws, gaming mechanics, hardware and other technologies can be protected by patents. Section A63F of the Cooperative Patent Classification (CPC) system primarily address video games and covers more than 100 gaming aspects, such as shooting of targets, input and output arrangements, rule enforcement, score computing, and game activation.

Since 2008, the USPTO has awarded at least 38 video game-related patents listing Capital Region inventors – and half of them were awarded in the last three years. Thirty of the patents are under A63F code.1 A handful of other patents are under the G10H code for electrophonic musical instruments and the G09B code for psychotechnic games. Since 2019, 14 A63F-coded patents listing local inventors have been awarded, plus four more under the G10H and/or G09B codes.2 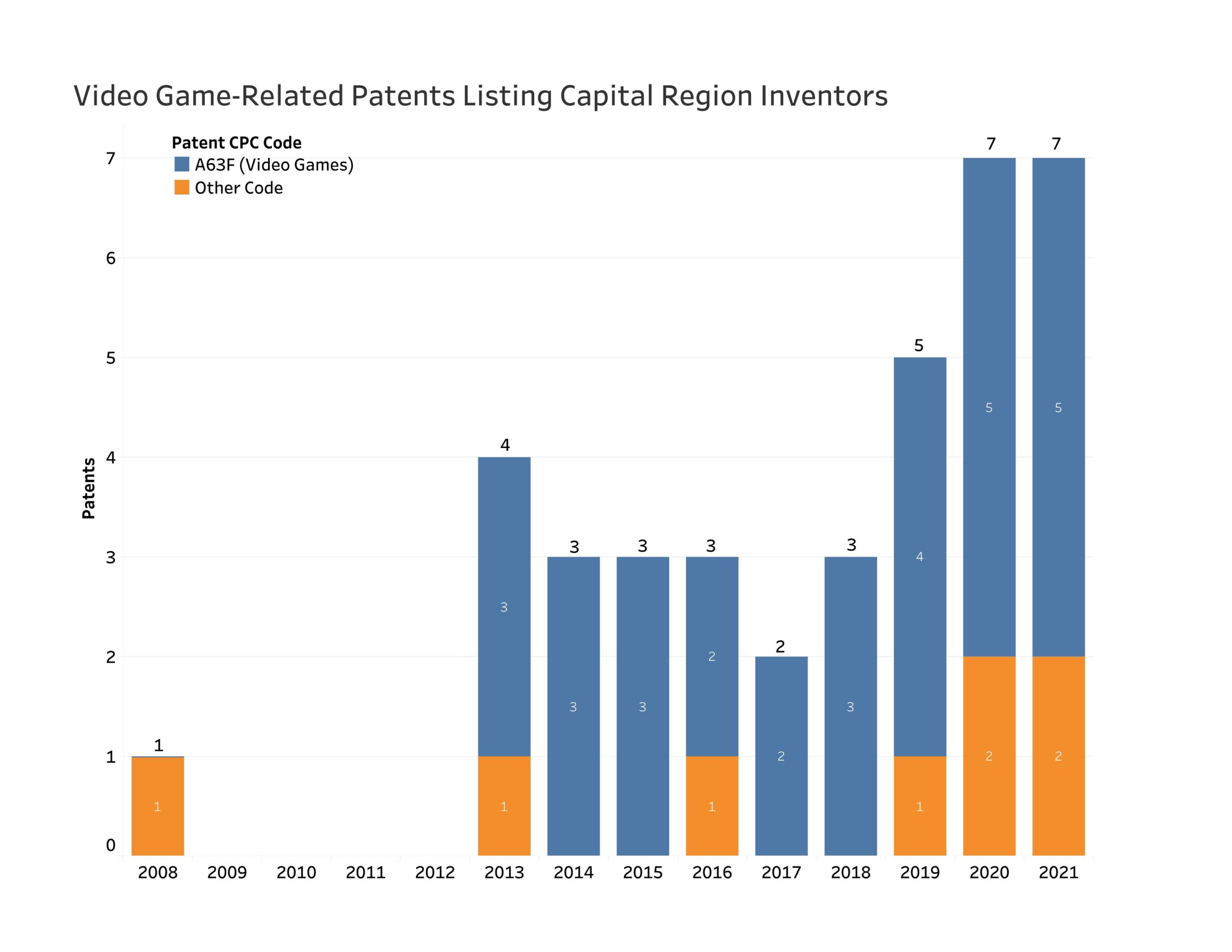 Activision’s first patent listing a Capital Region inventor, Kathik Bala, was awarded in 2008 and was for a  video game pick stylus. Bala was the co-founder of Vicarious Visions, which Activision acquired in 2005 and went on to work on “Guitar Hero III: Legends of Rock,” the industry’s first billion-dollar title. Since that first patent, the USPTO has awarded to Activision 24 more patents listing local inventors and mostly under the A63F code. That accounts for 10 percent of the 234 patents in Activision’s patent catalog. Its two newest patents listing local inventors were awarded last November for motion-controlled portals in virtual reality and music video game with user directed sound generation.

Over the last three years, the USPTO has awarded to IBM five A63F-coded patents listing local inventors and involving augmented and virtual reality. In 2020, after Network Next relocated from Santa Monica to Troy, the USPTO awarded the studio two A63F patents that address multiplayer-server connectivity issues, such as methods of bidirectional packet exchange over nodal pathways and methods of facilitating packet-based connections.

Last May, Union College received a G09B patent for an interactive physical and cognitive exercise system and method. The listed inventor is a Union College professor, Cay Anderson-Hanley, whose startup, iPACES (Interactive Physical and Cognitive Exercise System), teamed up with the Troy studio 1st Playable Productions to create a neuro-excergame to mitigate cognitive decline in elderly patients. In 2013, My Music Machines, now known as ZephyRx in Albany, received a G10H patent for an adaptive MIDI wind controller device. The studio combines video games and virtual reality for respiratory therapy.

CEG has been supporting the growth of the Capital Region’s Digital Gaming Cluster by conducting an annual studio survey,  launching the GameOn NY brand and website, administering a data analyst apprenticeship program for Velan Studios, and promoting the industry at events such as the Montreal International Game Summit (MIGS) and the Game Developers Conference (GDC).

1 Totals Includes two patents assigned to Network Next, but they were awarded prior to its relocation to Troy from Santa Monica.