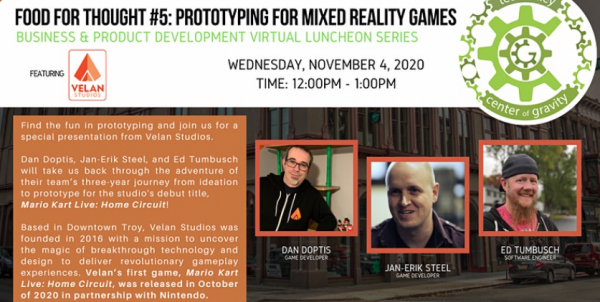 The Manufacturing Incubator at Tech Valley Center of Gravity presents Food for Thought: A Business & Product Development Virtual Luncheon Series. What started as an experiment by a small team at Velan Studios ended up as their debut title, Mario Kart Live: Home Circuit! Starting as a “find the fun” experiment, their team began the prototyping process for what would become a mixed-reality game partnership between Nintendo and Velan Studios right here at Tech Valley Center of Gravity!

“Find the fun” in prototyping and join us for a special presentation from Velan Studios! Dan Doptis, Jan-Erik Steel, and Ed Tumbusch of Velan will discuss the challenges and the magic of their team’s three-year journey from ideation to prototype for the studios debut title, Mario Kart Live: Home Circuit!

Dan Doptis, a Full Sail graduate, has worked in the video game industry for over 16 years. He is credited as an engineer and designer on over 8 titles and most recently is credited with being the Game Director and co-inventor of Mario Kart Live Home Circuit. He has a passion for toy building and is named on several US patents related to hardware interaction within a video game. He currently works at Velan Studios as an engineer.

Growing up, Ed Tumbusch always knew that he wanted to make video games. After graduating from the University of Nevada Reno with a degree in Computer Science, he began his adventure in the game development world that has spanned 14 years, 4 studios and over 12 shipped titles to date. Ed has always been an avid maker, diving headfirst into 3D printing, electronics building, woodworking, and drone racing. Today, Ed is employed by Velan Studios where he can combine his game development experience with his love for tinkering.

Jan-Erik Steel has worked in the game industry for over 20 years, and has been credited on over 15 console and handheld titles. His most recent role as Lead Programmer on Mario Kart Live: Home Circuit was a career highlight and a dream come true. Prior to joining the founding team at Velan Studios, Jan-Erik was co-founder of Waypoint Labs, an AR-centric startup that was awarded Grand Prizes at VR/AR challenges at the MIT Media Lab and an AT&T Developer Summit. He is named on several patents for physical toy-game interactions and touchscreen gameplay mechanics.

Velan Studios was founded in 2016 with a mission to uncover the magic of breakthrough technology and design to deliver revolutionary gameplay experiences. Based in downtown Troy, the team at Velan Studios is comprised of a diverse set of seasoned developers who have worked on multiple hit games and franchises; including Guitar Hero, Rock Band, Uncharted, Destiny, Skylanders, Metroid, Tony Hawk, Donkey Kong Country, and more. Velan’s first game, Mario Kart Live: Home Circuit, was released in October of 2020 in partnership with Nintendo.

The Manufacturing Incubator at Tech Valley Center of Gravity provides expert coaching and incubation across industries, advisory services and support for product-related startups. For members launching entrepreneurial ventures, we offer resources for product development through the Prototyping Center, with its advanced manufacturing equipment and flexible workspace.