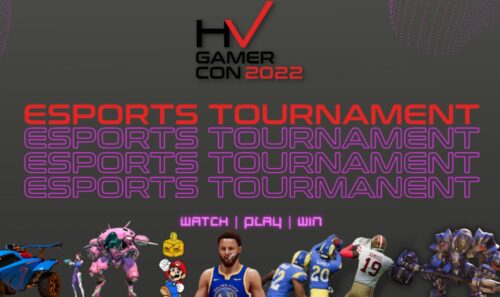 HV Gamer Con returns bigger and better than ever, and now you have the chance to win thousands in cash and prizes. Watch the best collegoate esports athletes from around the country come together to battle it out in Super Smash Bros. Ultimate, Ricket League and Overwatch. Get ready to make it big and hear from our experts during our panel discussions on “How to be Recruited to be an Esports Athlete” and “How to make a Career in Video Game Production”.

Take a break from the mainstage to compete in Madden 22, NBA 2k22, Rocket League and Super Smash Bros. Ultimate. Meet and greets with top gamers to be announced! You can buy a session pass or the all-access weekend pass to maximize your experience.

TBA: How to be Recruited to be an Esports Athlete at Mainstage

4pm: How to Make a Career in Video Game Production at Mainstage

12pm: How to Be Recruited to be an Esports Athlete at Mainstage

Per NYS Guidelines, masks are required for this event. This measure is effective Dec. 13, 2021 until Feb. 10, 2022, after which the State will re-evaluate based on current conditions.