The Capital Region Has This Many More Craft Beverage Producers

COVID-19 did not damper the spirit of the Capital Region’s craft beverage industry, which over the past two years has seen a 47.7 percent increase in active licenses for manufacturers, according to a Center for Economic Growth (CEG) analysis of New York State Liquor Authority data.

As of August, the eight-county region had 164 actively licensed breweries, distilleries, wineries, cideries and meaderies, compared to the 111 counted in CEG’s last survey of the industry in October 2019. Fourteen more craft manufacturing licenses are pending in the region.

Among active licenses, growth was strongest among breweries, with their ranks in the region increasing by 61.5 percent to 84. Distilleries also showed strong growth, increasing by 45.5 percent to 32. The region also has 35 wineries, nine cideries and four meaderies. New York only issued its first meadery license in 2019 (Royal Meadery in Delmar) and its first cidery license in 2013 (Nine Pin Cider Works in Albany).1

“Craft beverage manufacturers in the Capital Region are so fortunate to be supported by the extraordinary and dedicated customer base that is our local community,” said Sonya del Peral Nine Pin Cider Works’ co-founder and manager. “During COVID, we quickly pivoted to create alternative revenue channels including shipping, outdoor activities such as campfires and the introduction of our Mobile Bar; and our Capital Region fans responded resoundingly. We couldn’t be more grateful and plan to continue our innovative offerings into the future.” 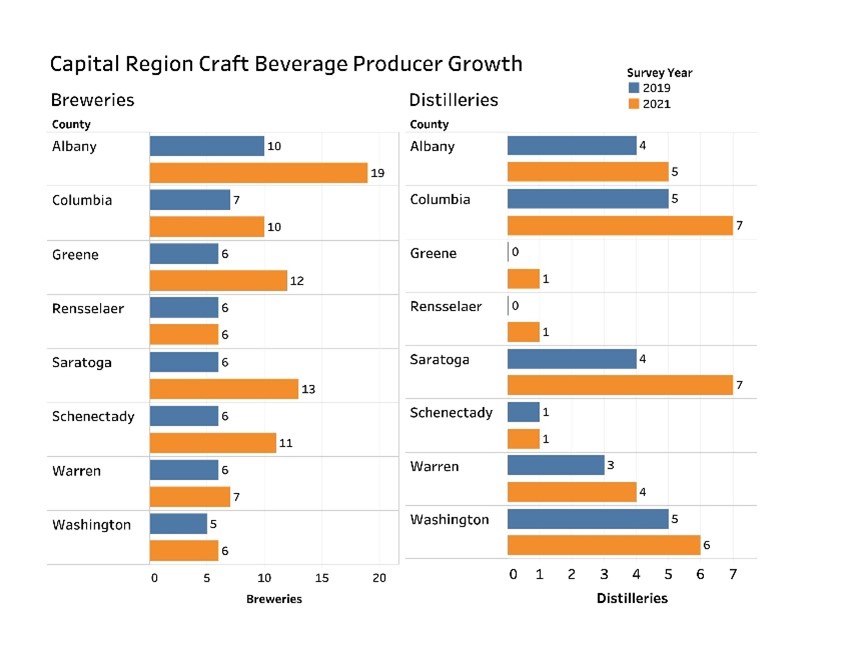 Craft beverage producer employment data is not available for every county in the Capital Region, but the local industry does support several hundred workers. In Columbia County alone, breweries employed 141 workers in 2020 – a five-fold increase from the 26 the industry had in 2016. Between 2017 and 2020, Saratoga County’s brewery employment more than doubled, from 39 to 89. As of last year, Rensselaer County breweries employed 48 and those in Washington County employed 24, according to U.S. Bureau of Labor Statistics data.

“The continual growth and expansion of the craft beer and craft spirits industries require educated and qualified staff,” said Jay Larkin, the lead instructor for SUNY Schenectady’s craft beer brewing programs. “The craft beer brewing and craft spirit distillation degree and certificate programs that we offer at SUNY Schenectady are in constant communication with our community partners, ensuring that our students are well prepared for the workforce from day one. Meeting industry-specific criteria, partnering with our talented craftsmen, and preparing our students for a dynamic career in this evolving industry makes SUNY Schenectady a great place to start, or to expand, this highly specialized workforce.”

Albany County leads the region in breweries (19) and meaderies (2). Saratoga and Columbia counties are tied for the most distilleries (7), and the former also has the most wineries (9) while the latter has the most cideries (3). During the two-year period, the number of craft beverage producers more than doubled in Greene County, from seven to 16. Albany County gained the most craft beverage producers (13), followed by Saratoga County (11). 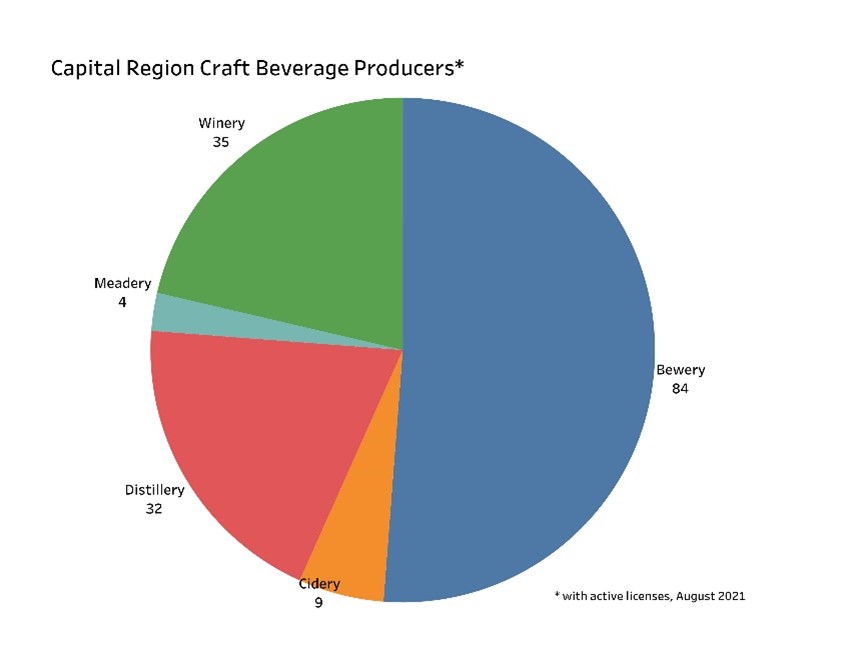 Among the 14 pending licenses, eight are for breweries, three for distilleries and one each for a winery and meadery. One more is seeking a combined manufacturing license. Six of the pending licenses are for craft beverage manufacturers in Columbia County, three in Albany County, two in Rensselaer County and one each in Saratoga, Schenectady and Warren counties. 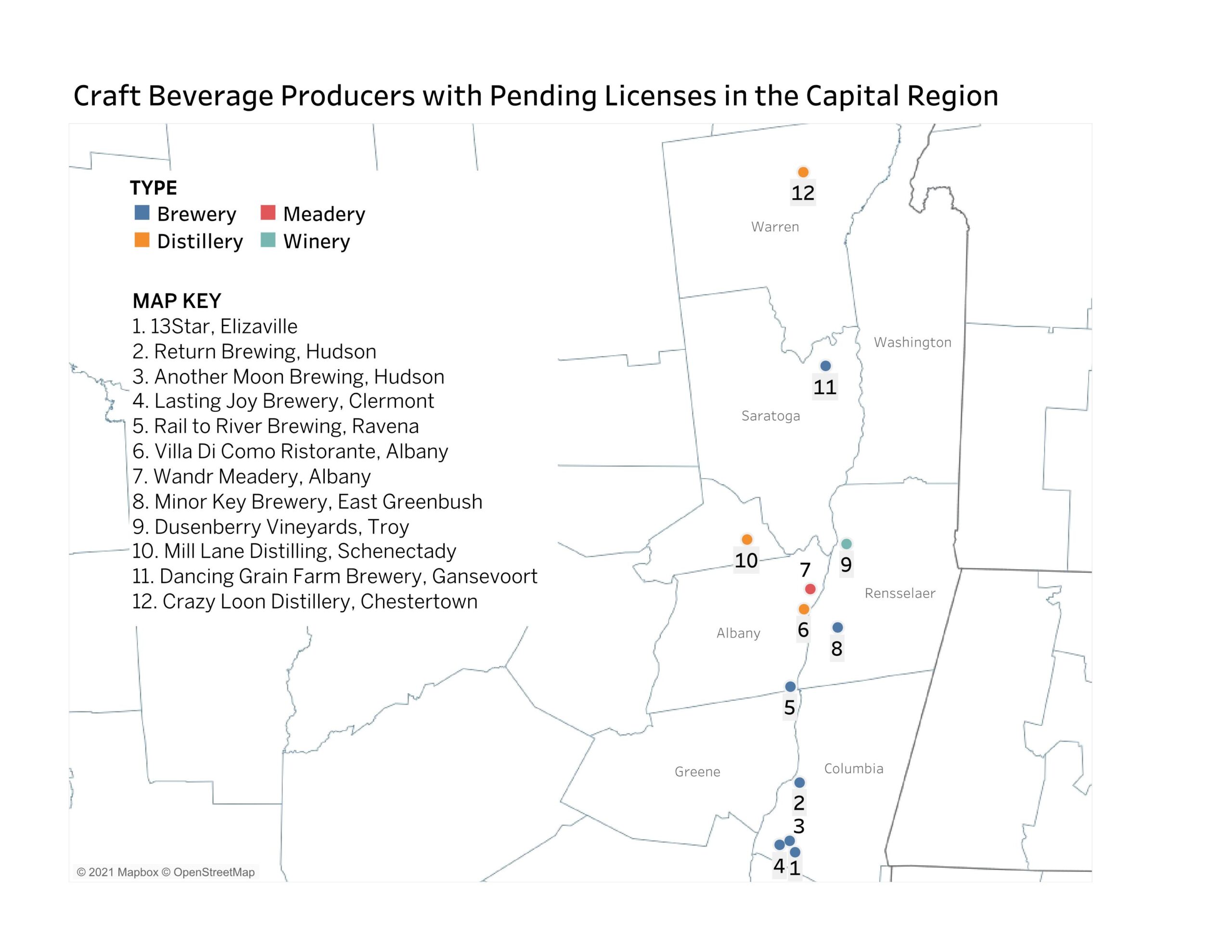