Capital Region personal income last year grew at its fastest rate in 31 years, driven by a $1.8 billion year-over-year increase in unemployment insurance (UI) benefits and additional federal stimulus payments, according to a Center for Economic Growth analysis of new data from the U.S. Bureau of Economic Analysis (BEA).

The BEA personal income data sheds light on how federal aid, primarily from the Coronavirus Aid, Relief, and Economic Security (CARES) Act, helped shield the Capital Region’s economy amid the pandemic by preserving – or even boosting – consumer spending power amid unprecedented unemployment. Even though the region in 2020 averaged five times more monthly unemployment insurance beneficiaries than the previous year, sales tax collections in the eight counties declined by only 2.5 percent, according to data from the New York State Department of Labor and Office of the Comptroller.

In 2020, the eight-county region’s personal income totaled $68.5 billion, up $4.8 billion (7.5 percent) from the previous year. That was the fastest annual growth rate since 1989, when it was 10 percent. Despite this robust personal income growth, the Capital Region lagged most of the state, ranking seventh among the 10 economic development regions for personal income growth. The lower ranking was partially a result of the region seeing less growth in the area of personal current transfer receipts, which includes federal stimulus and UI benefit payments. 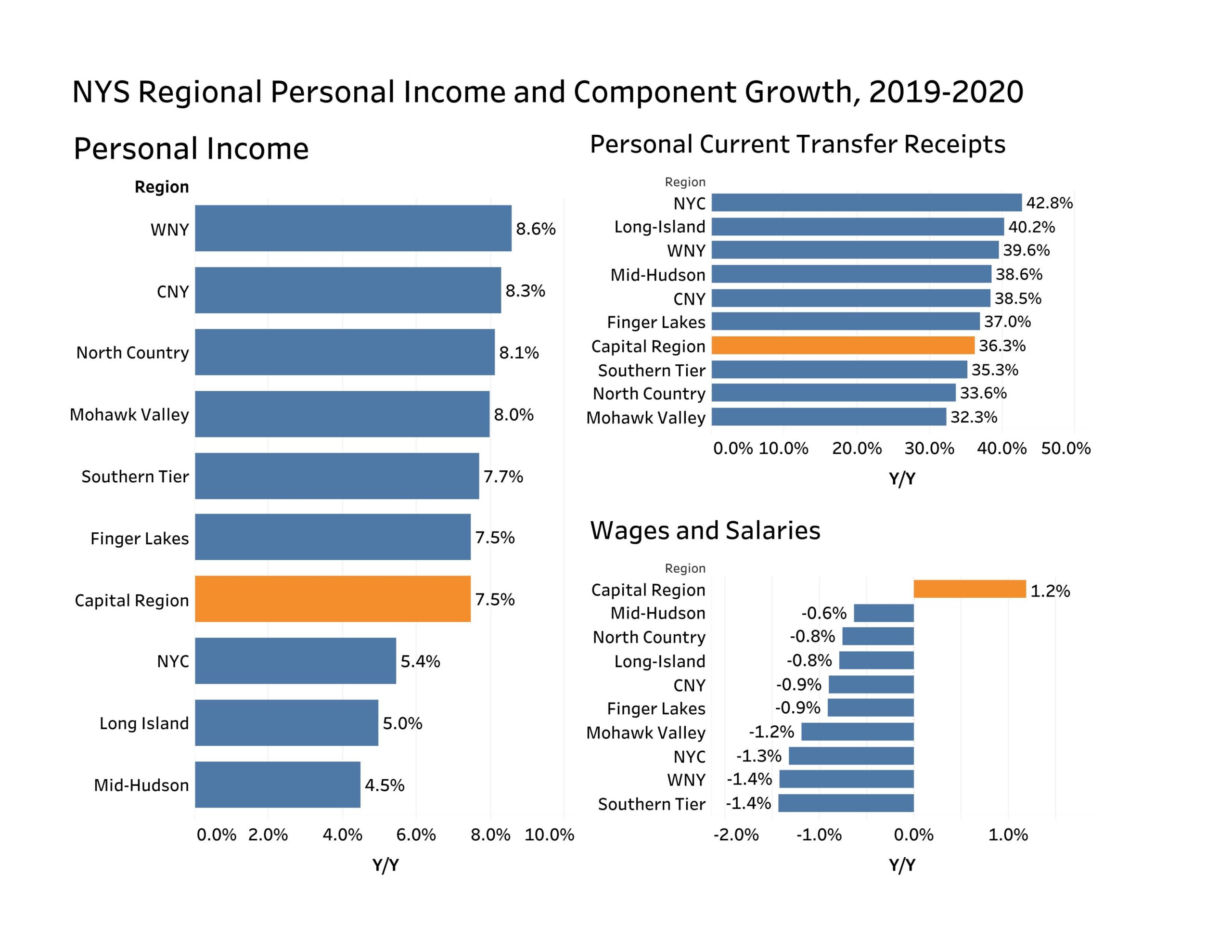 The Capital Region’s per capita income was $63,475, compared to $58,937 the previous year. That 7.7 percent increase was the fastest growth rate since 1989, but it was also the seventh slowest in the state. In the Capital Region, per capita personal income grew at the fastest rate in Washington County, where it increased by 9.9 percent to $46,305 – the state’s 13th fastest rate. 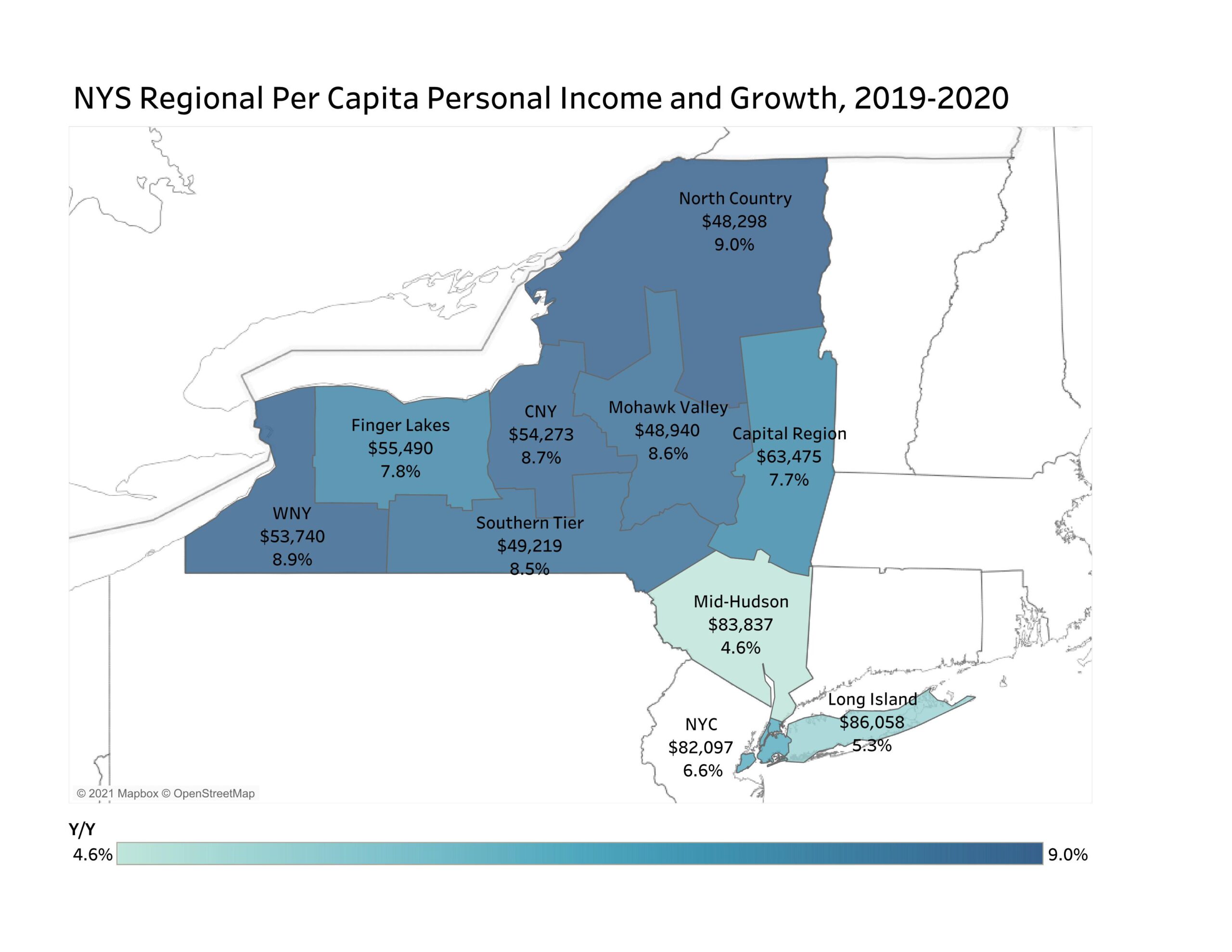 Major components of personal income are what individuals receive in return for the provision of the labor (wages and salaries), land (rent) and capital (dividends). 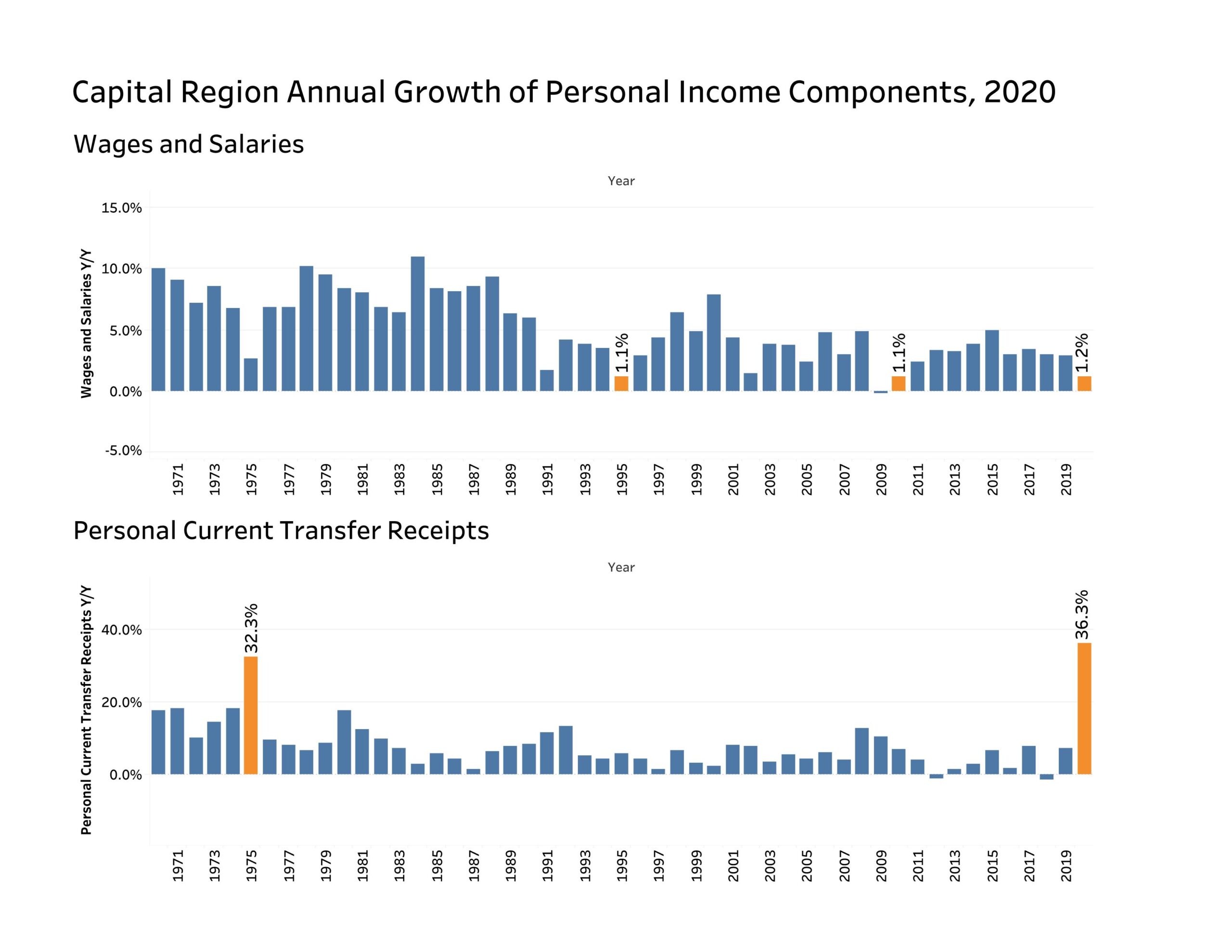 Another major component of personal income is referred to as “personal current transfer receipts.” This includes income provided by governments such as Social Security, Medicare, unemployment insurance payments and personal injury liability payments from businesses. Also included in this category is federal aid provided under the CARES Act. 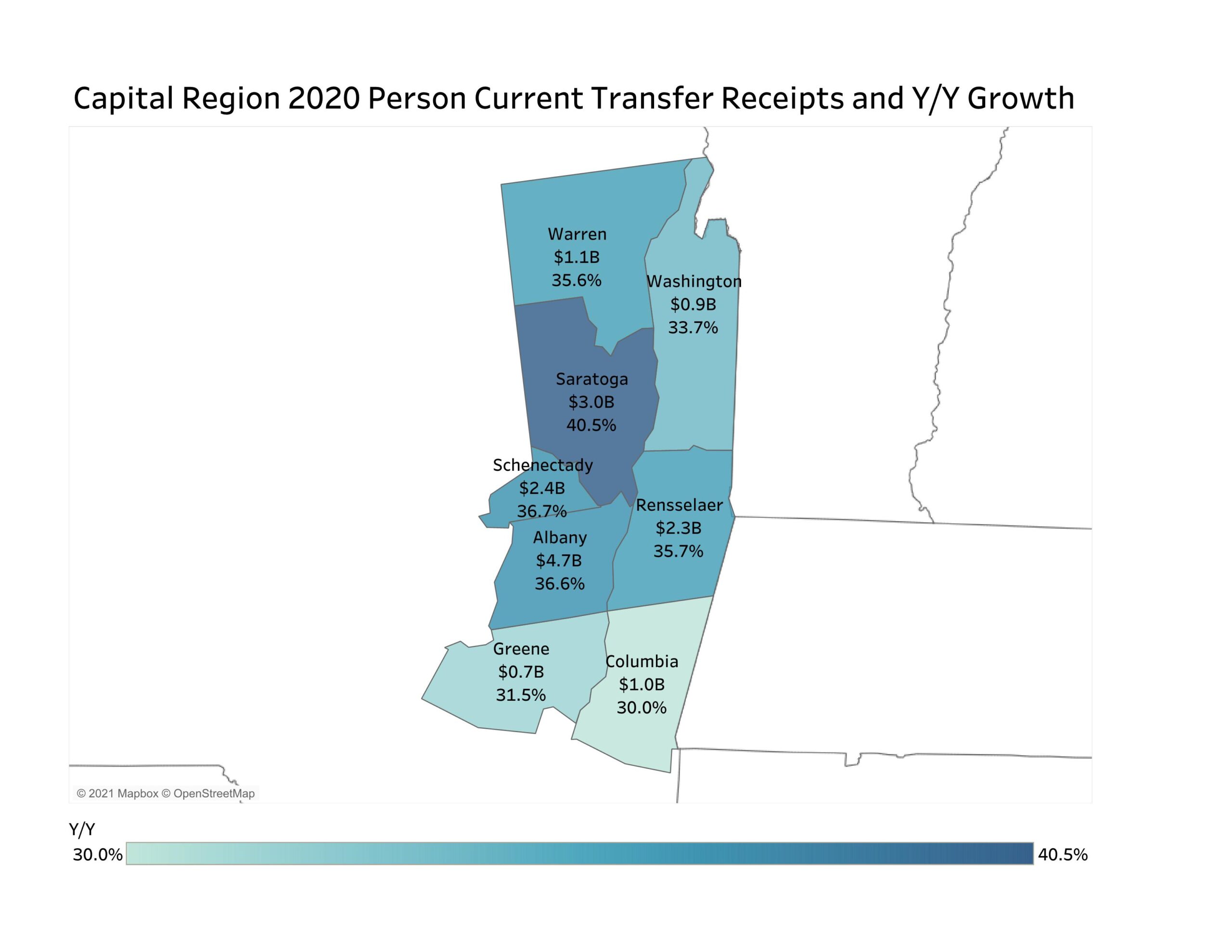 One major factor driving the Capital Region’s increase in personal current transfer receipts were UI benefits. Area workers in the region received $1.95 billion in UI benefits in 2020,1 which was 20 times greater than the $92.6 million paid in 20192. Whereas the 2019 amount included only regular UI benefits, the 2020 total included $509.4 million in regular UI benefits plus other UI programs funded under the CARES Act, most notably the Federal Pandemic Unemployment Compensation (FPUC) program. The FPUC provided an addition $600 in UI benefits during the weeks ending April 5 and July 26, 2020, contributing to the program’s region-wide total of $964.1 million in 2020, according to data from the New York State Department of Labor. 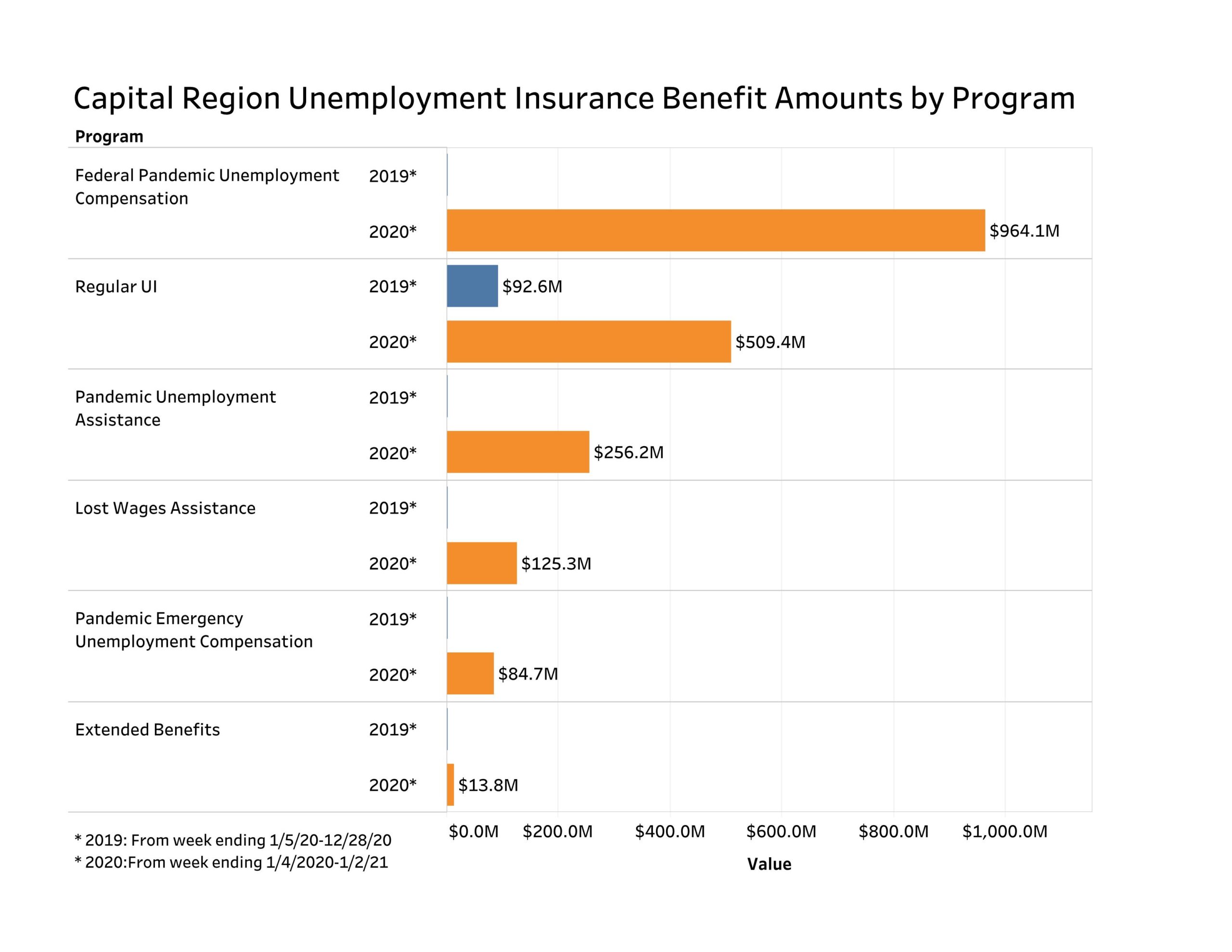 The first round of Economic Impact Payments (EIPs) funded by the CARES Act also contributed to the Capital Region’s increase in personal current transfer receipts. While county-level data is not available for the EIPs, New York received a total $15.7 billion in these stimulus payments in 2020. Some second round EIPs funded by the Coronavirus Response and Relief Supplemental Appropriations Act may also have added to the region’s growth in personal current transfer receipts. The Treasury Department and IRS started delivering the Round II EIPs on December 29, 2020, and through early February 2021 New York received a total $8.1 billion, according to Treasury data.

Since COVID-19, CEG has stepped up its efforts to support local businesses and accelerate the Capital Region’s economic recovery through the following activities: