Even before the pandemic made the Capital Region’s southern counties popular destinations for relocating New Yorkers, 18 of the region’s top 20 fastest-growing ZIP codes for gross income gains were in Columbia and Greene counties, according to a Center for Economic Growth analysis of new IRS data.

In 2019, 160 out of 181 ZIP codes in the eight-count region experienced year-over-year growth in their residents’ gross income. Gross income, according to the IRS, includes “wages, dividends, capital gains, business income, retirement distributions as well as other income.”

Between 2018 and 2019, the 12492 ZIP code covering West Kill in Greene County had the region’s fastest-growing gross income, which increased by 36.2 percent to $11 million. It was followed by two other Columbia County ZIP codes: 12526 covering Germantown and 12017 covering Austerlitz, both at 30.4 percent, and 12502 covering Ancram at 29.7 percent. Among the region’s 20 fastest-growing ZIP codes, 10 were in Greene County. 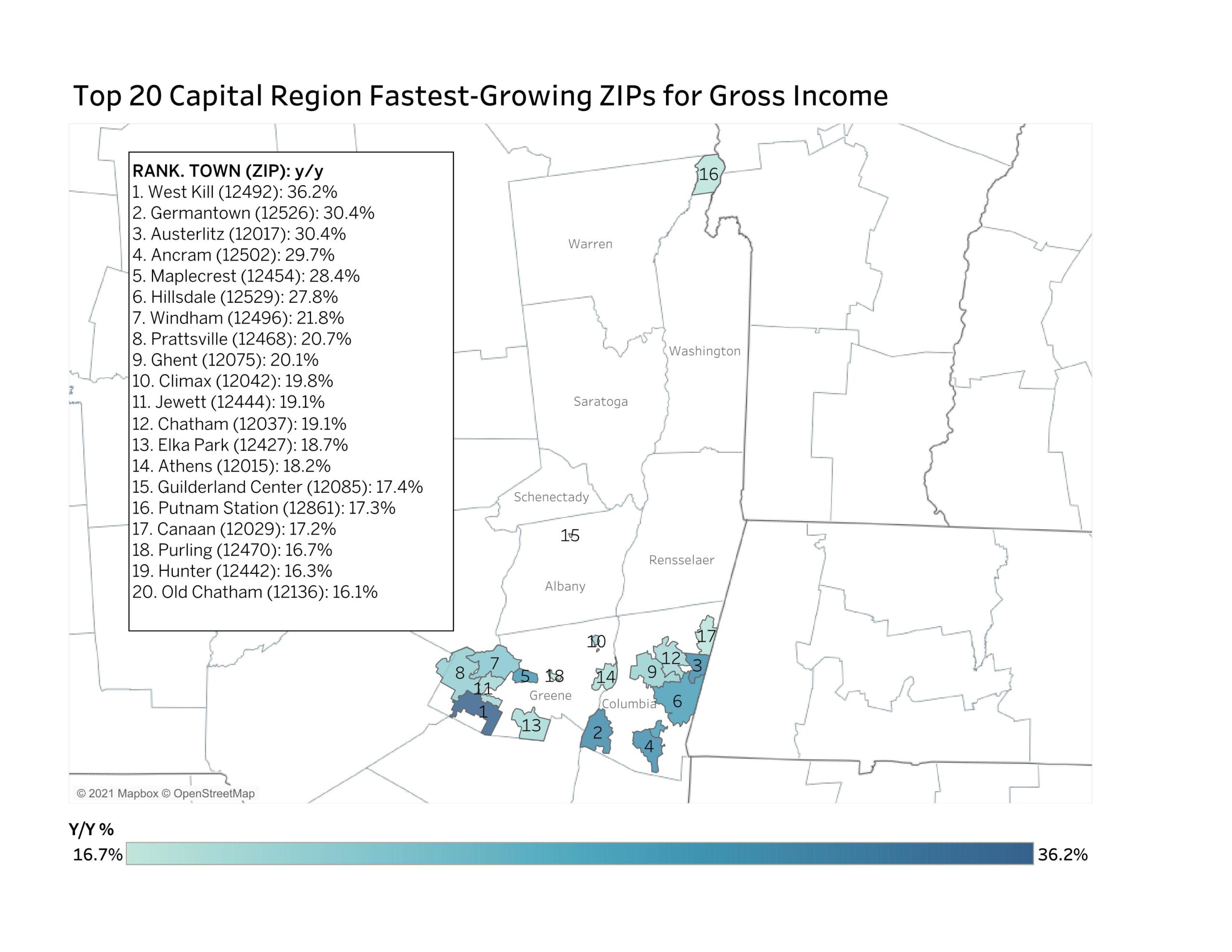 In 2019, the top 20 ZIPs that gained the most gross income were more distributed throughout the region. Among the top 20 ZIP codes with the biggest gains, five were in both Columbia and Albany Counties, four in Saratoga County, three in Schenectady County and one each in Greene, Rensselaer and Warren Counties. The ZIP code with the biggest year-over-year gain in gross income was 12047, which covers parts of Cohoes and Colonie. This ZIP code saw an $85.4 million increase (12.3 percent) in gross income to $776.9 million. It was followed by a $79.6 million gross income increase in the 12020 ZIP code covering Ballston Soa and Malta and a $45.7 million increase in the 12526 ZIP code covering Germantown. 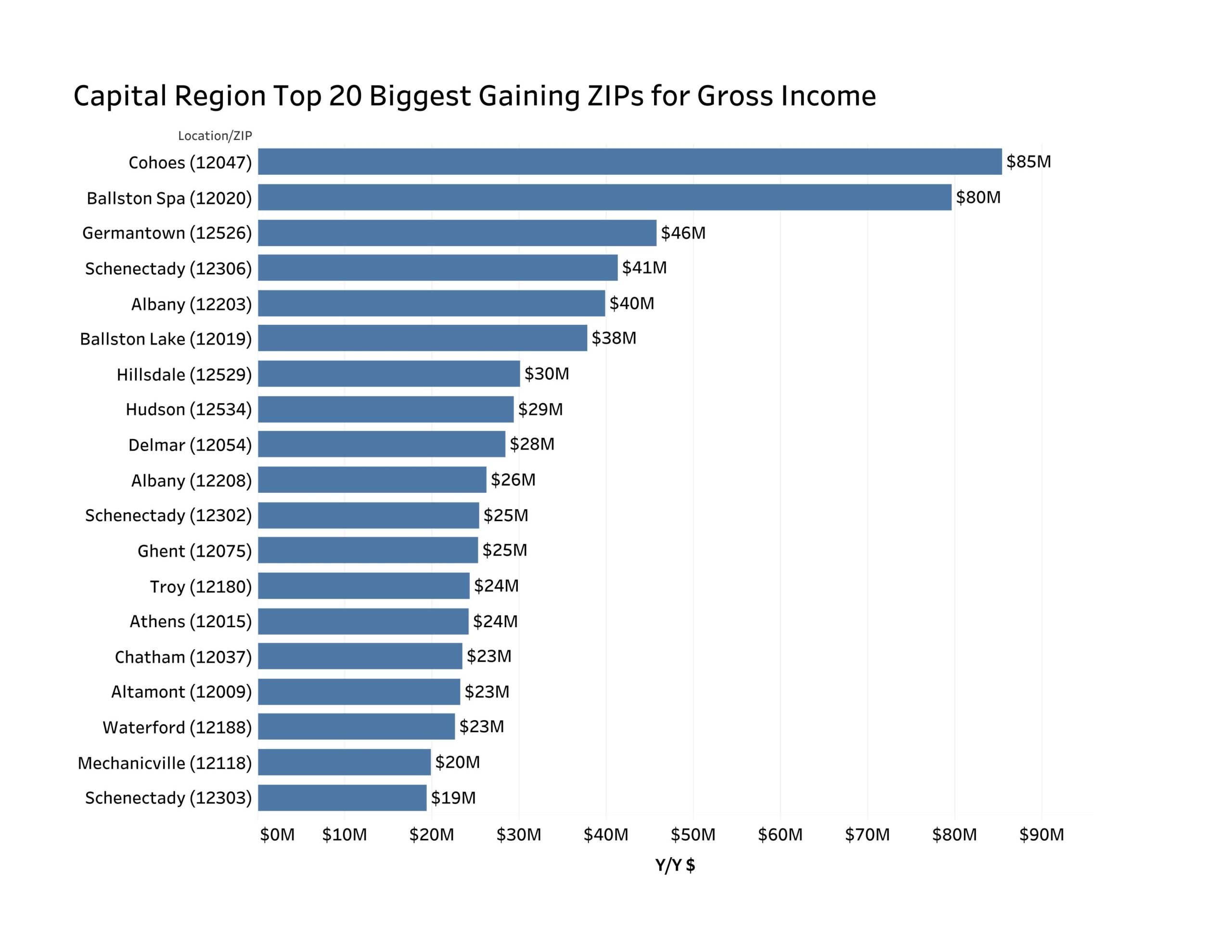 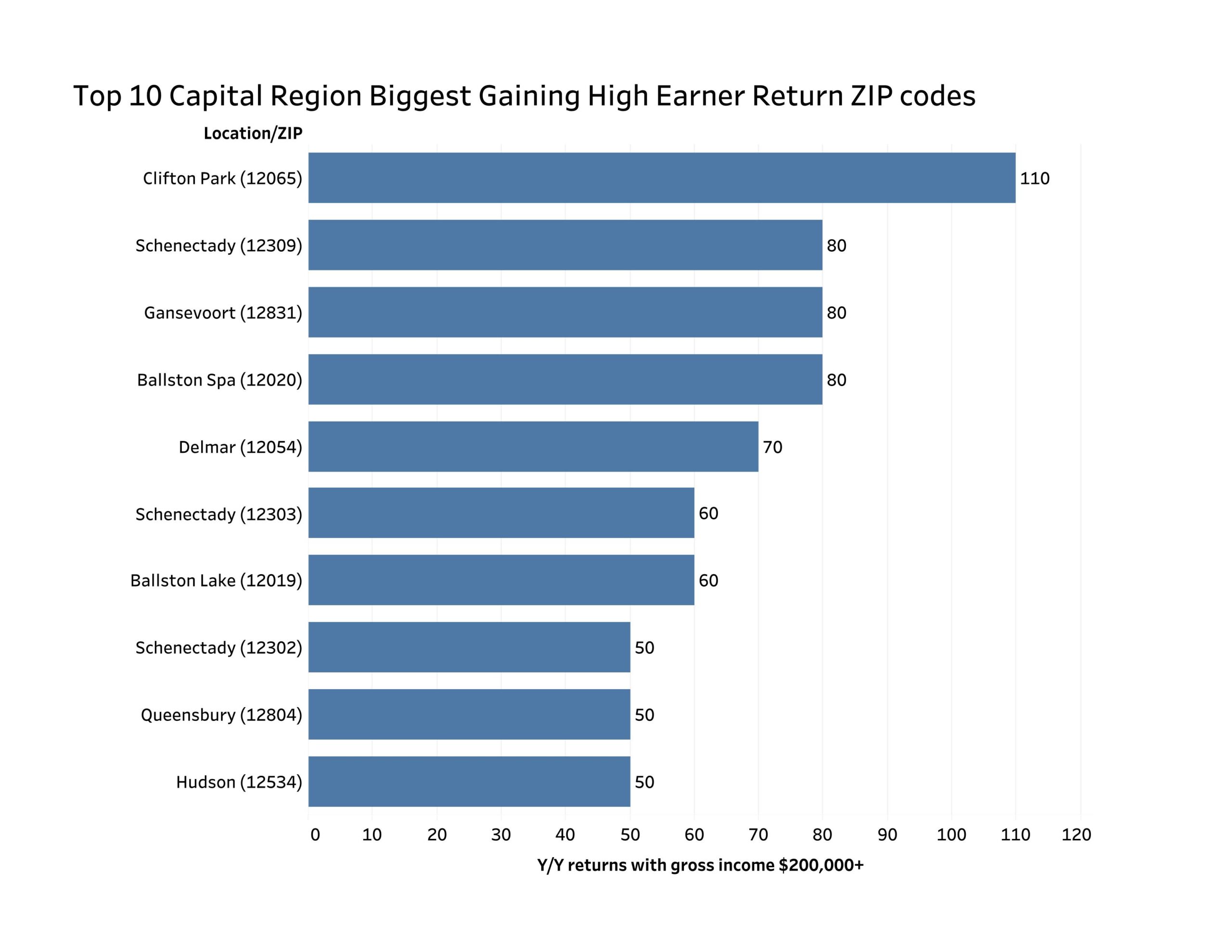 To attract more people to the Capital Region, CEG recently launched the CapNY campaign, with the CAPable of aNYthing tagline, to market the region for new talent.  A new website, (www.gocapny.com) and its associated social media channels (@GoCapNY)) will act as key modes of communication to interact with the brand and serve as primary platforms to market the region. The campaign focuses on mobile Millennial and Gen Z professionals and highlights for them the unique attributes of the eight-county, 1-million-strong Capital Region, including its vibrant urban centers, affordability, educated workforce, cultural assets, recreation, creative businesses, innovation, and proximity to major international cities.