New U.S. Census Bureau experimental data shows that, among mid-sized metros, the Albany-Schenectady Troy metropolitan statistical area’s high tech industry has the 10th most jobs in the U.S. and the second most among those in the Northeast.

Reinforcing the Albany metro area’s claim to being a “Tech Valley, the Census Bureau found the five-county MSA had 25,502 jobs at 1,003 high tech establishments in 2020. That was the 49th most high tech jobs among all U.S. metros and the 10th most among mid-sized metros with populations between 250,000 and 999,999. In the Northeast, Bridgeport was the only mid-sized metro with more high-tech jobs (46,794). 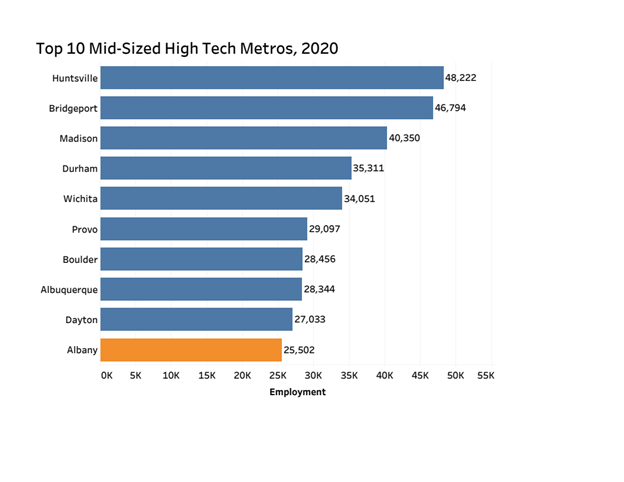 The Albany metro area’s high-tech industry has tripled in size since 1978, when there were 8,767 jobs. Over the last five years (2016-2020), its employment grew by 23 percent. That made it one of only three Northeast metros to ranking among the nation’s top 75 fastest-growing high tech metros, with the other two being Binghamton (53 percent) and Ocean City (24 percent). 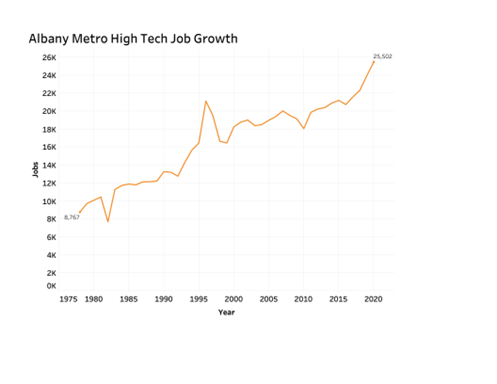 CEG also promotes the region’s high tech industries, including R&D to Commercialization and  Advanced Electronics at conferences and other events worldwide, such as Semicon West. that highlight the strength and size of the advanced electronics R&D and manufacturing sector.