Albany Medical College led the Capital Region in NIH funding with 35 awards totaling $11.5 million. It was followed by Curia (formerly AMRI) with 15 awards totaling $11.6 million. Curia’s 2022 total was an 81 percent increase over the previous year and its greatest annual amount on record. Examples of Curia’s NIH-funded projects include joint research with Anagin for a stroke therapeutic ($1.3 million), joint research with Rutgers University and Scripps Research Institute for a Parkinson’s therapeutic ($1.5 million) and therapeutics for Lyme Disease ($443,000). 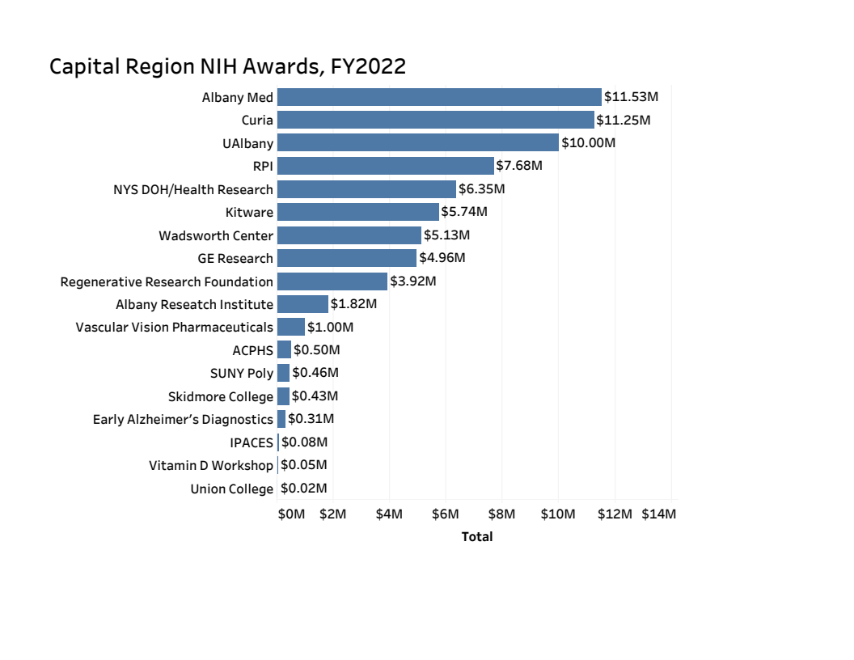 Three Capital Region startups received NIH awards. In Glenmont, Early Alzheimer’s Diagnostics, co-founded by the University at Albany chemist Igor Lednev, received a $306,974 grant from the NIA for research on screening for Alzheimers Disease based on Raman spectroscopy of blood. In Clifton Park, IPACES, founded by Union College professor Cay Anderson-Hanley, received two NIA grants totaling $75,536 related to its neuro-exergaming for the prevention and remediation of decline due to Alzheimer’s disease and related dementias. One grant was for consulting support as the startup interprets clinical trial data with an eye toward commercialization. And the other grant was for a Spanish language adaptation of the interactive Physical and Cognitive Exercise System (iPACES). In Wynantskill, Vascular Visions Pharmaceuticals also received its largest award: $996,212 from the National Heart, Lung, and Blood Institute (NHLBI) for research on a sulfated non-anticoagulant heparin nanoparticle for Sickle Cell Disease management.

Other interesting NIH awards include:

CEG is supporting the growth of the region’s life sciences cluster by leading the following initiatives:

Improving businesses’ access to labs at facilities, such as those at SUNY Polytechnic Institute, Rensselaer Polytechnic Institute and others affiliated with Innovate 518, a University at Albany-led collaborative effort of Capital Region incubators, accelerators, and entrepreneurial service providers.