Last May, the Capital Region’s unemployment rate dropped below 4 percent, ending its third longest steak above that level since 1990 (23 months). Often referred to as a threshold, either psychological or arbitrary, the sub-4 percent rate signals economic strength. However, issues remain about sustainability.

Although the region has taken few trips below this threshold since the last recession, 76 of the 342 months since 1990 were spent in sub-4 percent territory. In contrast, the U.S. unemployment rate spent only 14 months during that period below 4 percent, according to a Center for Economic Growth analysis of not seasonally adjusted data from the New York State Department of Labor and U.S. Bureau of Labor Statistics.

When the Capital Region’s unemployment rate reached 3.6 percent last May, that was the lowest rate for the eight counties since December 2006. The region followed up on this development with a June unemployment rate again below the 4 percent threshold, at 3.9 percent. 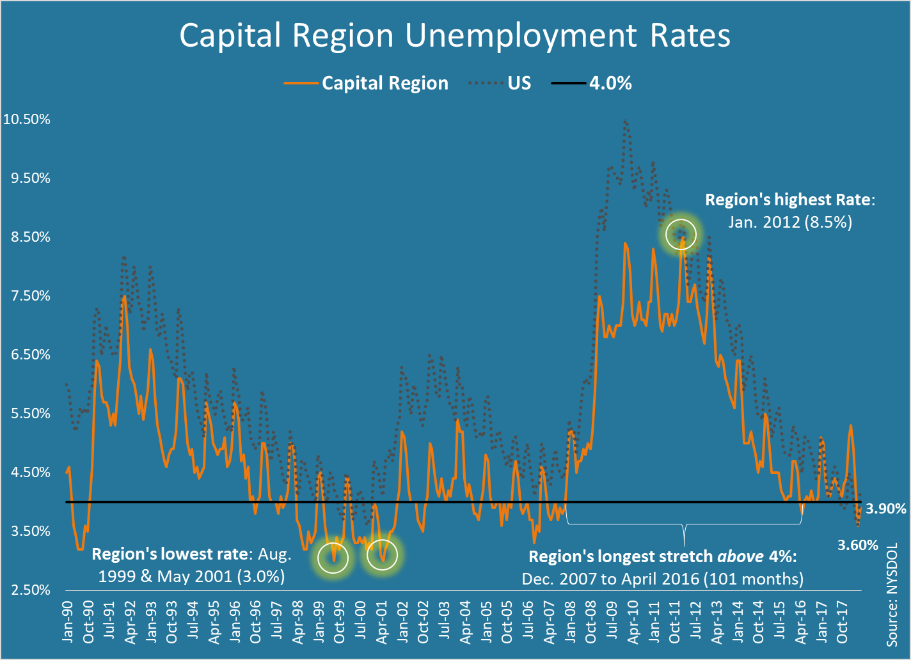 CEG’s initiatives to lower the unemployment rate of the Capital Region and sustain its growth include the following:

•   Representing CEG investors at more than 20 career and education fairs throughout the Northeast in 2018 to attract outside talent to the Capital Region;

•   Securing a $250,000 KeyBank Foundation grant to support the continuation of HVCC’s manufacturing boot camp program and the launch of a Certified Production Technician program at Schenectady County Community College (SCCC)

•   Using the KeyBank grant to market the HVCC and SCCC programs and to help them attract students from low-to moderate income households.

•   Working with the Community Loan Fund of the Capital Region (CLFCR) and Excelsior Growth Fund (EGF) under a separate $110,000 KeyBank Boost and Build grant powered by Jumpstart to grow the Capital Region’s ranks of minority- and women-owned business enterprises (MWBEs) and disadvantaged small businesses.