ALBANY, NEW YORK – The Capital Region’s Digital Gaming Cluster continues to expand in 2022. Not only has large studio employment increased, the region’s esports footprint is getting bigger with HV Gamer Con returning to the Albany Capital Center this month and new gaming facilities coming to several local colleges and universities, including a 4,000-square-foot, state-of-the-art arena at the University at Albany, according to the Center for Economic Growth’s 2022 Capital Region Digital Gaming Cluster Survey.

“CEG, together with our academic, industry, regional and NYS partners, markets the Capital Region as a rapidly expanding game development cluster where talented individuals, independent studios and large established studios and publishers can achieve their goals in a compelling and collaborative region,” said CEG President and CEO Mark Eagan. “With the proliferation of AI, simulation and game application to industries well beyond games purely as entertainment, our Capital Region Digital Gaming cluster is poised for additional dynamic growth as we emerge from the pandemic.” 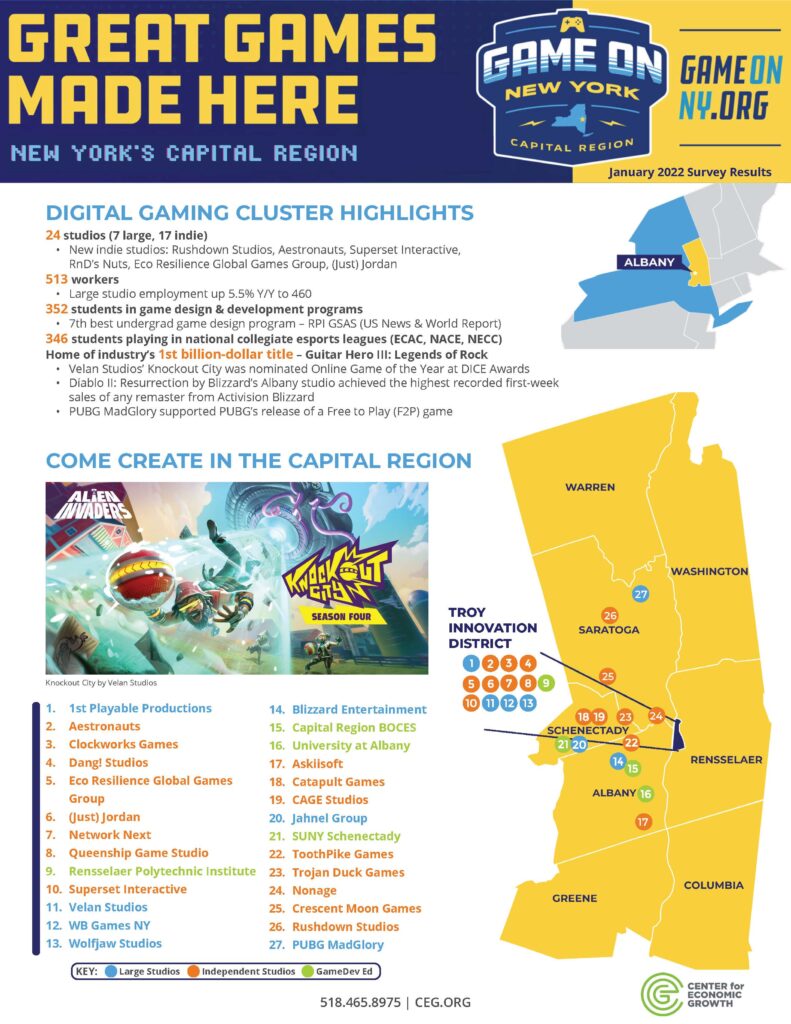 As of January 2022, seven large studios (>12 employees) in the eight-county region had 460 employees – up 5.5 percent over the year.1 When this large studio employment is combined with 53 employees, volunteers, interns and contractors at the region’s 17 independent studios (<12 workers), the Digital Gaming Cluster’s size totaled 513 workers. Eleven studios reported hiring plans for the next 12 months.

At the same time, the region has 352 students enrolled in game development programs. There are also 346 students playing in national collegiate esports leagues. To accommodate these growing ranks of gamers and game designers, UAlbany will build a 4,000-square-foot, state-of-the-art facility featuring 48 high-performance gaming PCs, 18 consoles, and a broadcasting and media creation room. Located in the heart of UAlbany’s uptown campus, the arena will be in proximity to the campus center, dorms, dining, parking and transportation. The project is currently in the design stage and the facility is scheduled to open in the fall of 2023.

The region’s large studios continued to develop and support blockbuster games. Velan Studios last year released its second title, Knockout City, which was nominated Online Game of the Year at the Academy of Interactive Arts and Sciences’ DICE awards. Also in 2021, Blizzard’s Albany studio, formerly known as Vicarious Visions, launched Diablo II: Resurrected. That brought a remastered version of the classic game to PC and consoles and achieved the highest recorded first week sales of any remaster from Activision Blizzard. In Saratoga Springs, PUBG Madglory worked on a major initiative to release PUBG as a Free to Play (F2P) game last January.

“We’ve always enjoyed growing our studio in the Capital Region not only because it’s where many of us grew up and feel at home, but because we can attract the best talent in the industry from local colleges and universities. The benefits of the quality of life for our team and cost of living, enjoying four seasons a year, and the comradery in the growing creative and technology industries here make operating our game studio in the Capital District a win-win,” said PUBG Madglory Director of Operations Clarke Foley.

Big large studio news from the past year and for the year ahead includes:

“The Capital Region has an amazing pool of seasoned workers driven by a vibrant community of existing developers as well as having tons of up-and-coming talent from local universities.  The quality of life that the region affords our employees is unparalleled and makes for a great balance between livability and a stimulating environment,” said Velan President Guha Bala.

“Albany is a great location for many outdoor activities such as biking, hiking, or skiing. It’s also home to a variety of entertainment venues, restaurants, and recreation. Our employees enjoy a low cost of living relative to more metropolitan areas and the region boasts several fantastic public school districts. There’s truly something for everyone in and around New York’s Capital Region,” said Simon Ebejer, Blizzard’s vice president of operations for the Diablo franchise.

The region’s large studio class is poised to expand with the October 2021 launch of the rapidly growing Rushdown Studios in Ballston Spa. Led by Kirk Becker, a longtime software engineer for PUBG MadGlory, Rushdown provides major gaming companies with solutions for multiplayer games.

“The region has proven that we can build genre defining video games. This is a place where game devs can have a better quality of life than in LA or NYC. Get paid well for what you love doing and have something to show for it,” said Becker. He added that in 2022, “We will get a physical location for an office and have the best company culture of any of the gaming companies in the region.”

In 2021, CEG launched www.GameOnNY.org to showcase the region’s digital gaming assets to attract investment, new studios and talent.  In 2022, CEG will be building out the GameOnNY website, turning it into a more in-depth portal. It will encourage game studios and developers to invest in or relocate to the Capital Region. 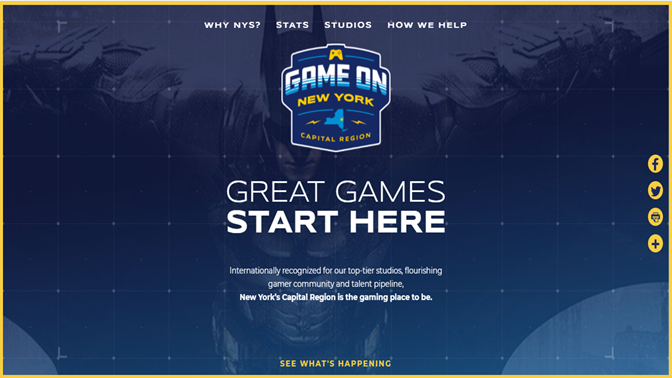 CEG will continue to promote the Capital Region Digital Gaming Cluster at industry events throughout North America, including PAX East in Boston in April and the Montreal International Game Summit (MIGS) in November.

U.S. News and World Report recently ranked RPI’s Games and Simulation Arts and Sciences (GSAS) program as the seventh Best Undergraduate Game Design Program in 2022. In May 2021, RPI graduated its first cohort of master’s degree students in the Critical Game Design graduate program. RPI has new fellowship funding opportunities for master’s degree students in Critical Game Design. The GSAS program will open a new immersive environments and virtual reality lab for teaching and research on campus. The university also plans to re-open its performance motion capture facility, which has been on pause during the pandemic.

“The Capital Region has a wealth of talent, great quality of life, affordable cost of living and doing business, and a dynamic and supportive community,” said GSAS Director Ben Chang.

“Not only is the Capital Region establishing itself as a destination for talented game designers, developers and companies from throughout the world, it is a wonderful place to live. Proximity to major cities, transportation hubs and resources designed to accelerate growth in digital gaming and related technologies compliment an affordable cost of living, wonderful schools, cultural arts, outdoor and nature activities and a region rich in history. It is clear why so many people have decided to live and work here,” said Michael C. Leczinsky, a CECH professor of practice.

SUNY Schenectady is revising its Programming for Game Design A.S. degree program and convening a new Advisory Board. The college is also in the process of joining the Unity Academic Alliance so that students can work toward Unity certification. Unity is the industry-standard engine for 2D and 3D game development and Unity certification ensures employers and transfer institutions that a student is qualified to use the tool to create games. It validates students’ skills and signals to employers that students have achieved a certain skill level.

“There are many advantages including the fact that we are close to Montreal, a big advantage for upstate students. There is a new and expanding gaming hub right here in the Capital Region, one whose job prospects continue to look strong,” said Eileen Abrahams, SUNY Schenectady’s dean of the Division of Liberal Arts.

Capital Region BOCES is preparing to expand the capacity of its Game Design & Implementation. The program currently has 79 students at the Center for Advanced Technology in Rotterdam. When the program will grow to 95 students when it moves next fall to BOCES’ new Career & Technical Education facility in Albany.

HV Gamer Con, the largest esports event in the region, will return to the Albany Capital Center (ACC) on March 19 and 20. This will be the first in-person Eastern College Athletic Conference (ECAC) tournament at the ACC since its inaugural event in 2019.

“We are thrilled to have our ECAC Esports Championships return to the Albany Capital Region again this year at HV Gamer Con,” said ECAC CEO Dan Coonan. “The ranks of our ECAC intercollegiate esports conference have grown to 130 schools nationwide, including 800 teams and 4,000 competitors, and we now span coast to coast and into Canada. But no region within our footprint is more welcoming or better equipped to stage our in-person championships than the Capital Region. We are so appreciative of the support we receive from the State of New York, and we attribute so much of our enormous success as an intercollegiate esports conference to that relationship.”

There are 346 local students playing in national collegiate esports leagues, such as the ECAC, National Association of Collegiate Esports (NACE) and National Esports Collegiate Conference (NECC). UAlbany plans to build a new, expanded, state-of-the-art facility at its uptown campus to coincide with the growth of esports program. RPI’s student esports club is currently fundraising for a new esports room in the Student Union with plans to launch within the next 12 months. Siena also plans to upgrade its esports facilities at the college’s Marcelle Athletic Complex.

1 CEG conducted this survey in January 2022, with 19 of 24 known active studios responding. When possible, for several studios from which responses could not be obtained, CEG estimated their number of workers by tallying people listed on LinkedIn as currently working for them. The threshold for “large studios” was changed from 15 to 12 employees to better reflect studios with full-time employees. For the large studio 2022 headcount and year-over-year change, Jahnel Group has replaced ZephyRx, which in 2021 outsourced its digital gaming operations to 1st Playable Productions.