IBM’s announcement last month of its new Telum processor developed at its new research center at the Albany Nanoplex Complex is just one example of how the Capital Region is making its mark in artificial intelligence (AI) R&D. Local institutions are participating in major AI research projects funded by the National Science Foundation (NSF), and several other companies have received federal contracts and grants for research in this field.

In fact, the Brookings Institution this month released a report on the cities that will drive the AI revolution. Brookings identified the Albany-Schenectady-Troy metropolitan statistical area as one of 87 potential adoption centers with “some, but below-average, AI activities.” Only 13 metros were classified as “early adopters” and 21 as “research and contracting centers.” There are 261 metros with no significant AI activities. The Albany metro area scored  best on Brookings’ Indexed AI capacity levels in the areas of federal contract and federal R&D. 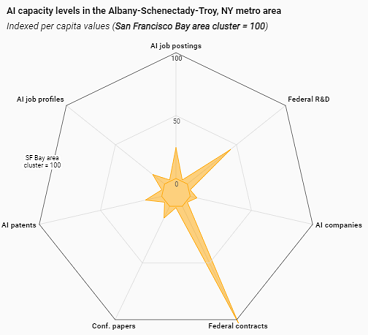 The Telum processor features on-chip acceleration for AI inferencing for the detection of fraud mid-transaction. It is IBM’s first chip developed at it IBM’s AI Hardware Center, which opened in 2019 at the Albany Nanoplex Complex. Under development for the past three years, Telum will be rolled out in the first half of 2022.

With the NSF’s July announcement of the establishment of 11 new National Artificial Intelligence Research Institutes, the Capital Region now has two institutions serving as academic partners involved in this initiative. One of the new NSF institutes created under this $220 million initiative is the NSF AI Institute for Intelligent Cyberinfrastructure with Computational Learning in the Environment (ICICLE), which is led by Ohio State University and has Rensselaer Polytechnic Institute (RPI) as a principal organization. The RPI researcher involved in this project is an expert in ecological applications of computer vision and has created with his students the Image-Based Ecological Information System, which is open-source software that can help identify animals. RPI also is involved in the Rensselaer-IBM Artificial Intelligence Research Collaboration and houses the Rensselaer Artificial Intelligence and Reasoning Laboratory (RAIR Lab).

These 11 NSF National AI Research Institutes announced last July build on the seven established in 2020 totaling $140 million. One of them was the NSF AI Institute for Research on Trustworthy AI in Weather, Climate, and Coastal Oceanography (AI2ES), led by the University of Oklahoma and with the University at Albany as a principal organization. Through this institute, UAlbany researchers will develop AI-based technologies for winter weather prediction. Other UAlbany assets vital to this project include the xCITE (ExTREME Collaboration, Innovation, & Technology) laboratory, a state-of-the-art data and visual analytics center, and the Center of Excellence in Weather & Climate Analytics.

AI in the Capital Region

Examples of other AI initiatives in the Capital Region include:

GE Research in Niskayuna has received a $12.6 million award from the U.S. Department of Energy to for the protection of critical power assets through the development of quantum-level cybersecurity measures supported by AI and digital twins.

RPI has received $654,073 from the National Institute of Biomedical Imaging and Engineering to develop and evaluate a Virtual Operating Room Team Experience (VORTeX) simulation system, which will incorporate recent advances in AI, machine learning, cloud computing and mobile device-based virtual reality. This project also received 646,125 in 2020.

An RPI researcher, using a $549,646 NSF award, is leading an effort to improve medical imaging quality and computer-aided diagnosis by developing AI techniques to guard algorithms against contaminated data and other vulnerabilities.

Kitware in Halfmoon was awarded a $4.9 million DARPA contract for the Science of Artificial Intelligence and Learning for Open-world Novelty (SAIL-ON) program, which will enable military AI systems to automatically detect and adapt to novel conditions beyond their initial training.

Kitware has received several other federal grants and contracts, including a $1.5 million Department of Defense (DoD) contract for AI battle damage assessment and a $6.2 million DoD contract for architecture, algorithms and innovative interfaces for do-it-yourself AI.

CDPHP has adopted  coverage determination policies that provide certain members with access to KidneyIntelX, an AI-powered diagnostic platform that assess the risk of kidney disease progression and kidney failure, among other kidney complications.

SUNY Polytechnic Institute startup ITrakNeuro has developed AI hardware and software for Magnetic Resonance Imaging and angiography of the brain.

CEG is accelerating the growth of the Capital Region’s Software-IT Cluster through the following initiatives:

Connecting firms, such as QTH 54, with manufacturers that can test and benefit from their software solutions.

Conducting an annual survey of the Capital Region’s Digital Gaming Cluster and launching the Game On NY web site to promote the cluster’s size, growth and opportunities.

Providing venture pitch coaching to software startups such as Dumbstruck.