The federal government last fiscal year nearly doubled the amount of prime contract and grant funding it awarded for artificial intelligence (AI)-related research performed in the Capital Region, according to a Center for Economic Growth (CEG) analysis of data on USASpending.gov.

This influx of federal funding comes amid a rapid expansion of the Capital Region’s AI Cluster. Just one year after the Brookings Institute in 2021 identified the Capital Region as one of 87 potential artificial intelligence adoption centers, UAlbany is launching a $200 million AI supercomputing initiative. Other recent AI activity in the region includes IBM Research and UAlbany partnering to use AI for water quality, weather prediction and renewable energy forecasting research; RPI founding a new Rensselaer Institute for Data, Artificial Intelligence, and Computing (DAIC); and GE Research expanding its 5G and supercomputing capabilities.

“The Albany AI initiative will provide the state-of-art, high-speed computational power needed by SUNY researchers to solve many societal challenges such as climate change and health disparities while also helping design next generation semiconductors through new AI algorithms and machine-learning systems that will fuel innovation.”  said UAlbany’s Vice President for Research and Economic Development Thenkurussi Kesavadas. “This initiative builds upon existing artificial intelligence strengths in academics and research already present in the Capital Region, further solidifying our area as a destination for industries investing in artificial intelligence.”

In fiscal 2022, the federal government awarded 30 prime contracts and grants totaling $17.9 million to companies and institutions performing AI-related research and services in the eight-county Capital Region. That was 95 percent more than the previous year’s total award amount and eight times greater than its total of $2 million just five years earlier. 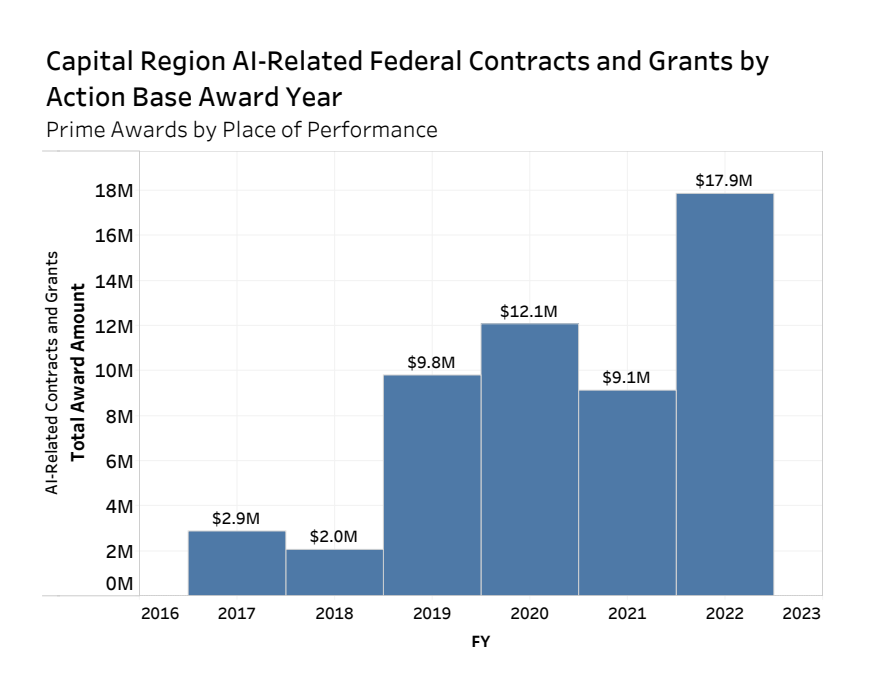 Examples of AI-related contracts grants awarded in fiscal 2022 include:

SUNY Research Foundation/UAlbany: Mathematical and computational approaches for deep neural network compression to realize the fast and efficient deployment of AI systems on mobile platforms with low-power budgets such as smartphones ($276,611 grant)

For this study, CEG identified prime contracts and grants for work performed in the Capital Region and containing any of 30 AI-related keywords in their descriptions.1 Award dates are based on award base action date. Award amounts are based on the total obligated amount. Sub-awards are not reflected in the totals.

The top keyword, “algorithm,” is not exclusive to AI, and in several instances may apply more to machine learning or predictive analytics. However, algorithms are mathematical processes that are important building blocks for AI in that they provide instructions for extracting value from data. In fiscal 2022, federal agencies awarded 15 AI-related contracts and grants with the term “algorithm” in their descriptions, three times more than five years earlier. 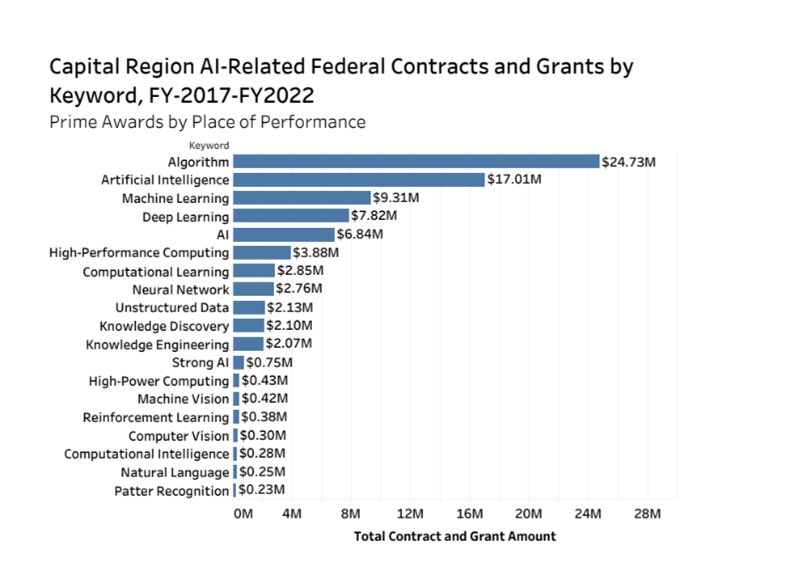 Between fiscal 2017 and fiscal 2022, Kitware has received the greatest amount in AI-related prime contracts and grants, totaling $21.2 million from 16 awards. It was followed by RPI with $15.2 million from 30 awards and GE Research with $9.5 million from four awards. 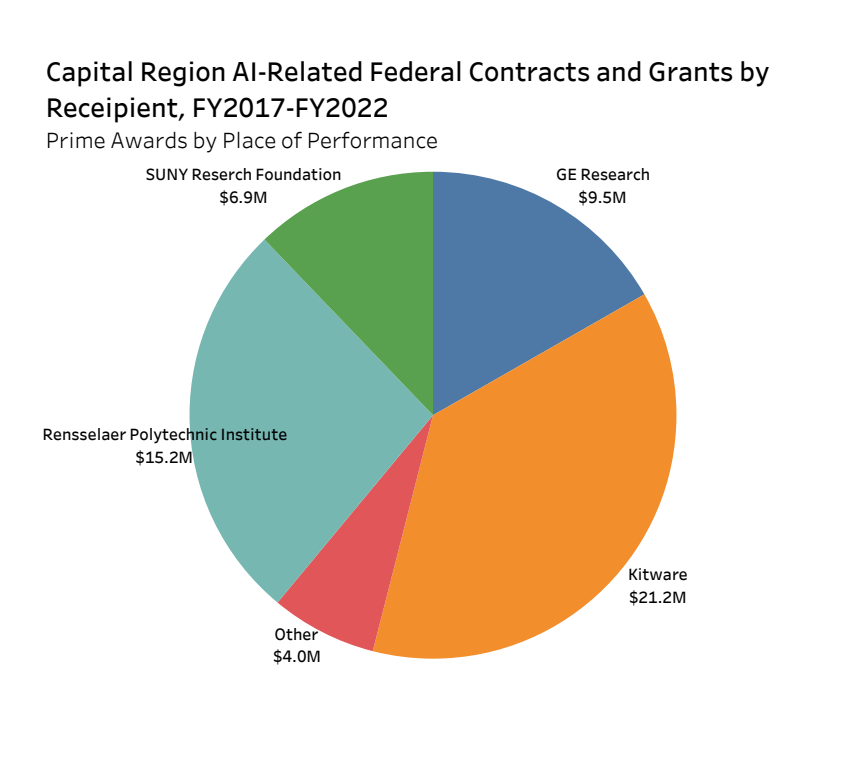 During the same period, seven federal agencies have awarded AI-related prime contracts and grants for work performed in the Capital Region. The region’s top awarding agency was the Department of Defense with $17.9 million from 16 awards. It was followed by the Department of Energy with $14.8 million from nine awards and National Science Foundation with $13.1 million from 33 awards. 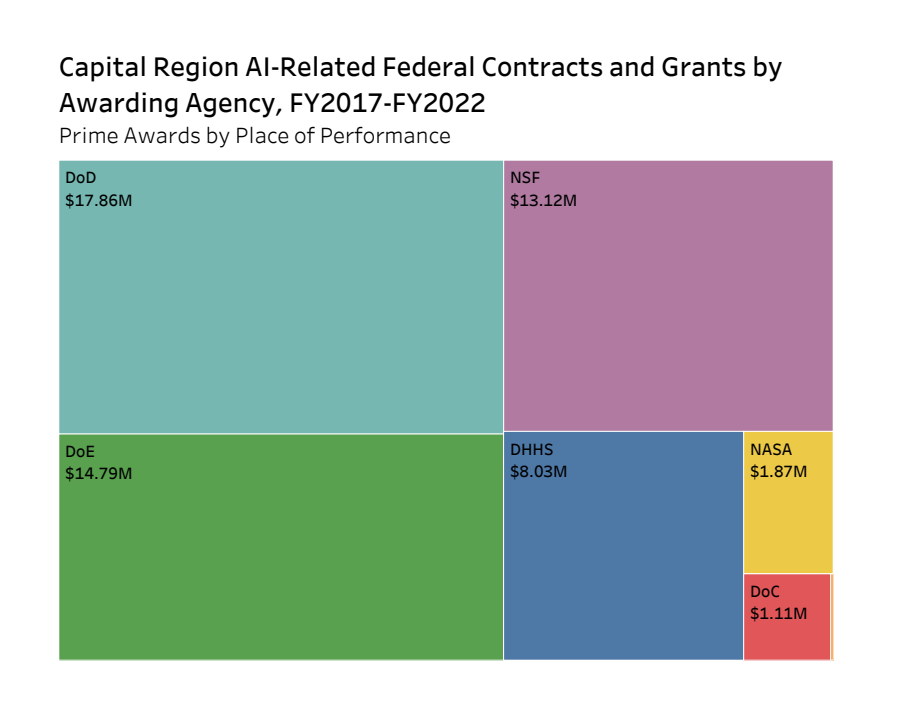 In May 2022, the National Science Foundation announced the first funding opportunity for the NSF Regional Innovation Engines (NSF Engines) program that aims to create regional-scale innovation ecosystems. Winning regions can receive up to $160 million for up to 10 years to establish each Engine, plus up to two years of pre-launch Engine development funding.

Full NSF Engine proposals are due in early 2023.