A Reenvisioning of the Capital Region’s Rural Areas

An Urban Institute “Reenvisioning of Rural America” is honing in on the strengths and potential of the Capital Region’s rural communities while also concentrating the size of its rural footprint.

Whereas the federal government has traditionally negatively defined rural areas as any non-urban areas, a new Urban Institute study instead defines rural census tracts based on their resources, diversity, and potential. Focusing on these strengths, the Urban Institute analyzed 13,000 census tracts in micropolitan, small town and isolated rural areas and categorized them under seven groups.

Only 28 Capital Region census tracts in four counties – Columbia, Greene, Warren, Washington – fell within three of the re-envisioned rural groups. Those tracts have a population of 82,104 and spanned a land area of 1,588 square miles. That is a substantially smaller land area footprint than the 4,754 total square miles in the region designated as rural areas by the U.S. Census Bureau. 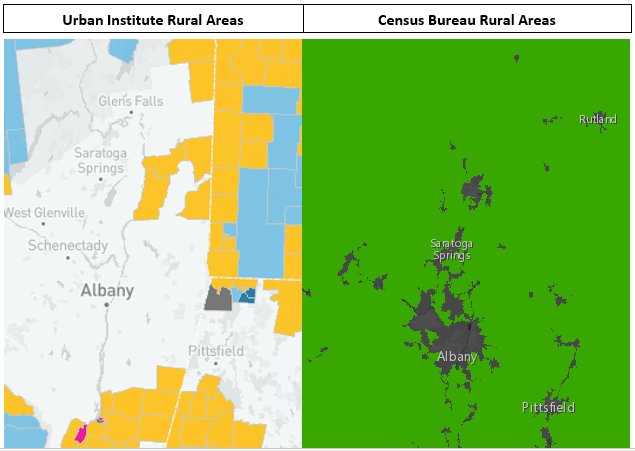 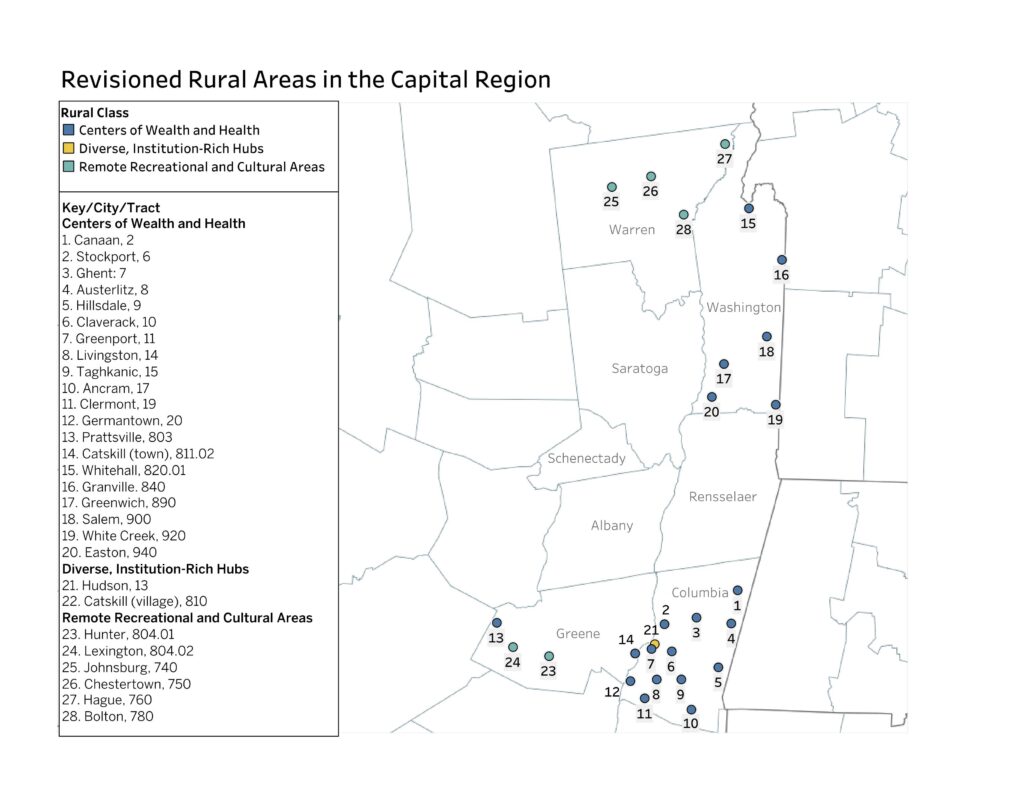 The region’s two Diverse, Institution-Rich Hubs were tracts in Catskill and Hudson. These hubs are racially and ethnically diverse and “have strong access to community institutions and health facilities, as well as the greatest amount of community development investment.” Challenges faced by these hubs are “limited financial resources, low labor force participation rates, the lowest life expectancy, the worst air quality, and the lowest share of households with access to home broadband or a cellular data subscription.”

The region also had seven Remote Recreational and Cultural Areas, with three in Greene County and four in Warren County. Parks, such as the Catskills or Adirondacks, on average cover more than three quarters of these tracts, which have the “highest capacity of cultural organizations and the highest financial capacity per 1,000 people of social welfare organizations. This group also has the highest density of historic properties and the best access to child care centers.” However, “This group lacks access to many services; it has the lowest proximity to fire stations and emergency medical services, banks and credit unions, health care facilities, public libraries, and schools. This group also has the second-lowest access to transportation stations and terminals, the lowest census participation rate, and the fewest hospital and nursing home beds per capita.”

The Center for Economic Growth has been supporting economic growth in the Capital Region’s reenvisioned rural areas through the work of its Business Growth Solutions, which helps urban and rural manufacturer, such as White Creek in White Creek, become more efficient and skill up their labor force.  CEG is also working to attract talent to the region by highlighting its rural communities, such as Catskill, Hudson and Washington County through its CapNY talent attraction tool. CEG also supported the Capital Region Economic Development Council (CREDC) in preparing its 2021 Strategic Update, which features a new Magnet strategy that targets urban and rural communities in need of economic diversification. Eleven of the Urban Institute’s reenvisioned rural census tracts were also designated by the CREDC as “Magnet communities.”