One in 20 semiconductor-related device patents1 awarded by the U.S. Patent and Trademark Office (PTO) in 2017 can be traced back to a Capital Region inventor, according to a Center for Economic Growth review of patents listed in PTO’s Patent Full-Text and Image Database.

Capital Region inventors’ tally of semiconductor-related device patents increased over the year by 206, or 18.8 percent, totaling 1,301. As an indication of the region’s rising status as a leader in semiconductor R&D, local inventors had their names listed first on 972 of those patents, up 14.1 percent from the previous year.

Driving the increased patent generation was an 86.6 percent increase in IBM patents with local listed inventors, totaling 741. Partially offsetting this gain was a 28.1 percent decline in GLOBALFOUNDRIES patents with local named inventors to 345, but that remained well above the 2015 level of 255.

The PTO last year awarded semiconductor device-related patents with local listed inventors to 33 companies and institutions, one more than the previous year.2 Out of those 33 assignees, 19 had one or more patents with a first-named local inventor. 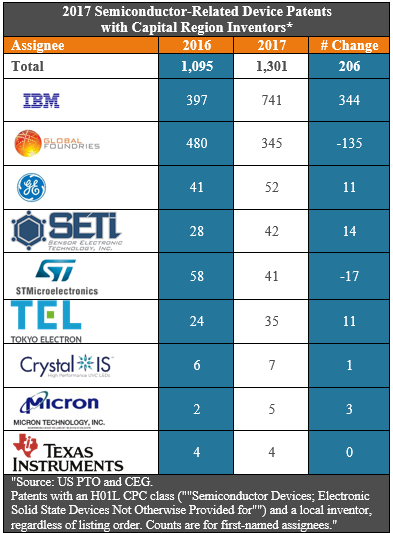 • Representing the Capital Region at six semiconductor/nanotechnology conferences worldwide in 2017.
• Partnering with the Global Semiconductor Alliance and Saratoga County Prosperity Partnership for the new GSA Silicon Summit – East on Oct. 9 at the Saratoga Springs City Center.
• Partnering with Saratoga Economic Development Corp., Clarkson University and SUNY Adirondack for a new integrated circuit design program, the Electronic Design Innovation Initiative, in downtown Saratoga Springs.
• Hosting the semiconductor industry in the Capital Region at events, such as the Albany Symposium series in the early 2000s and the 87/90 Semiconductor Summit and Business Connection Forum in 2017.
• Co-sponsoring the Semiconductor Industry Association’s annual awards dinner in San Jose, California for 16 consecutive years.
• Commissioning a recently released Georgetown University study on the economic impacts of New York’s investments in its nano-cluster.
• Supporting the development of an industrial advisory board and recruitment of former GLOBALFOUNDRIES CEO Doug Grose to serve as director of New York Center for Research, Economic Advancement, Technology, Engineering and Science (NY CREATES) to manage industrial and business relationships at the SUNY Polytechnic Institute.

1 Patents with an H01L CPC class (“Semiconductor Devices; Electronic Solid State Devices Not Otherwise Provided for”) and a local inventor. Counts are for first-named assignees.

2 Counts are for first-named assignees.