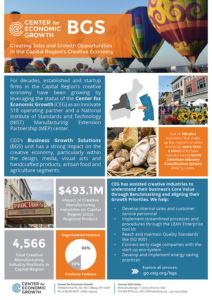 As the Capital Region looks to expand its creative economy, the Center for Economic Growth (CEG) is working in many of its hottest industries to maximize their economic contributions throughout the eight counties.

CEG this winter is partnering with the Upstate Alliance for the Creative Economy (ACE) to highlight the diversity, size and impacts of the creative economy in the Capital Region. This month, CEG and ACE launched a business roundtable tour that will collect ideas from business and community leaders on how best to grow creative jobs and opportunities. The first event was held in Troy (February 12), and five others will be held in Glens Falls (Feb. 27), Schenectady (Feb. 28), Saratoga Springs (March 5), Albany (March 12) and Hudson (March 13).

According to ACE, the creative economy “includes the enterprises and people involved in the origination, production and distribution of goods and services in which artistic and cultural content gives the product or service value in the marketplace.” In 2016, the region’s industries included more than 35,600 positions, with 49 percent of them being wage or salaried employees and the rest being freelancers.

Whether a person is making a video game, craft spirits, printed materials, maple products or apparel, they are all partaking in the creative act, attempting to find that balance between talent and technique, innovativeness and business. With its decades-old mission of assisting local manufacturers, CEG’s Business Growth Solutions (BGS) unit is ideally positioned to help them achieve that balance.

For years, established and startup firms in the region’s creative economy have been growing by leveraging CEG’s status as an Innovate 518 operating partner and a National Institute of Standards and Technology (NIST) Manufacturing Extension Partnership (MEP) center. BGS’s impact within the creative economy has been felt strongest within its design, media, visual arts and handcrafted products, and artisan food and agriculture segments. 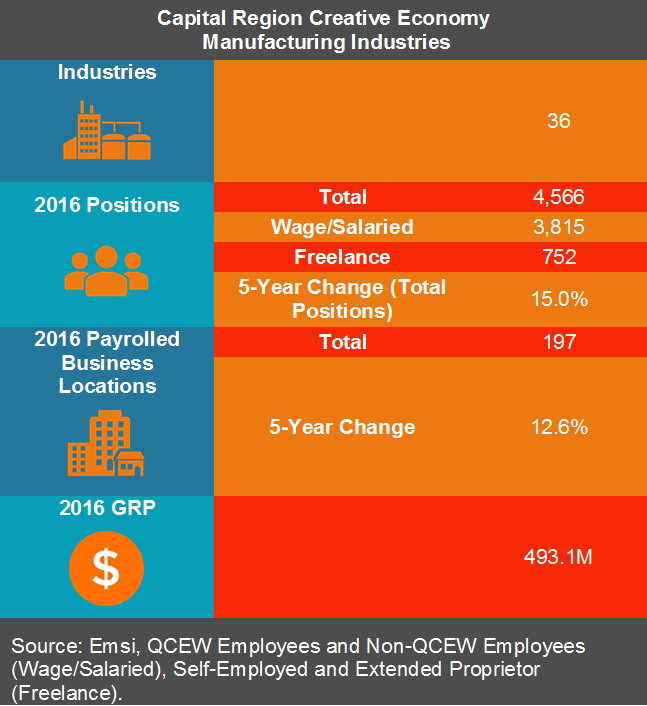 In 2016, there were 4,566 positions within the creative manufacturing industries – up 15 percent from five years earlier. Four-fifths of those positions (83.6 percent) were for wage or salaried employees. There were 752 creative freelance manufacturers, and growth within this population was even more impressive at 19 percent since 2012, according to a CEG analysis of data from Economic Modeling Specialists Inc. (EMSI).

CEG is involved in this initiative with ACE so it can help those employer manufacturers in creative industries grow. BGS does this by helping manufacturers reach new markets, operate more efficiently, use less energy or utilize clean energy, commercialize innovative technologies and access resources.

Below are a few example of the services BGS has provided to manufacturers in creative industries:

On top of wanting to help established manufacturers employ more people, CEG wants to help some of those freelancers become employers. BGS does this by improving startups’ access to labs, office and other facilities; assisting in the development of a venture pitch; identifying potential investors and mentors; and providing direction for resources.

Below are examples of the startup support services that BGS has provided to entrepreneurs in both the creative industries of manufacturing and software publishing:

The Creative Economy and Industry Attraction

Although CEG’s efforts are largely focused on the manufacturers and tech firms, other creative industries are also advancing the organization’s efforts to grow the Capital Region’s greater economy. For example, the creative economy’s performing arts and heritage and preservation segments contribute to the Capital Region’s unmatched quality of life that has been recognized in numerous state and national rankings of best places to live and work. With Albany being ranked a Best City for Music Fans, Glens Falls being called one of the Coolest Small Town in America and Hudson being named Most Vibrant Arts Communities, CEG can more effectively demonstrate to companies interested in expanding that the Capital Region offers a wealth of the live-work-play options that their skilled workers want.

Further enhancing the region’s creative economy are the hundreds of projects the Capital Region Economic Development council (CREDC) has supported since 2011. The “Next-Tech” and “Lift-Off” strategies of the Capital Region’s five-year economic development plan, Capital 2020, aim to support tech and creative startups and craft food and agriculture companies. Additionally, in its 2016 Progress Report, the CREDC created another initiative dedicated to “Investing in Our Creative Economy.” To advance this strategy, in the latest round of Regional Economic Development Council (REDC) Awards, the CREDC received $13.6 million for 17 priority projects related to the creative economy.

On top of working with ACE, CEG will assist the CREDC later this year to identify creative economy-related projects for Round 8 of the REDC process. CEG believes that by supporting the Capital Region’s creative economy we will be creating a stronger economy overall.