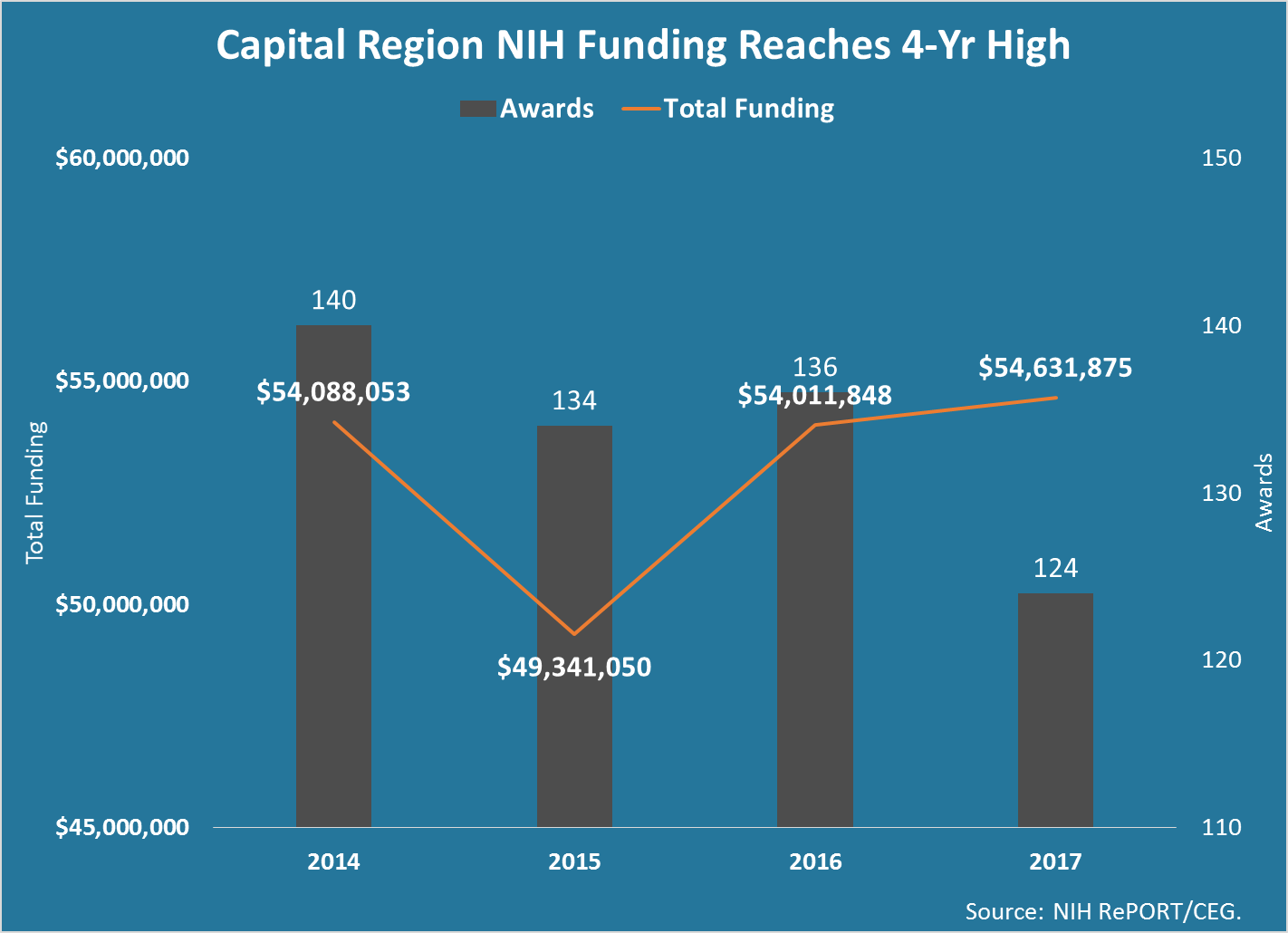 In fiscal 2017, the Capital Region had a dozen NIH awardees with over $1 million in total NIH funding. The New York State Department of Health’s Wadsworth Center, Albany Medical College, the University at Albany and Rensselaer Polytechnic Institute were the region’s NIH grant rainmakers, accounting for $40 million, or 64 percent of total funding. Three quarters (75.7 percent) of all funding went to Capital Region academic institutions, government agencies and nonprofit organizations. Small firms accounted for 14.9 percent of the total and larger firms, such as GE Global Research and Albany Molecular Research Inc. (AMRI), accounted for 9.4 percent. 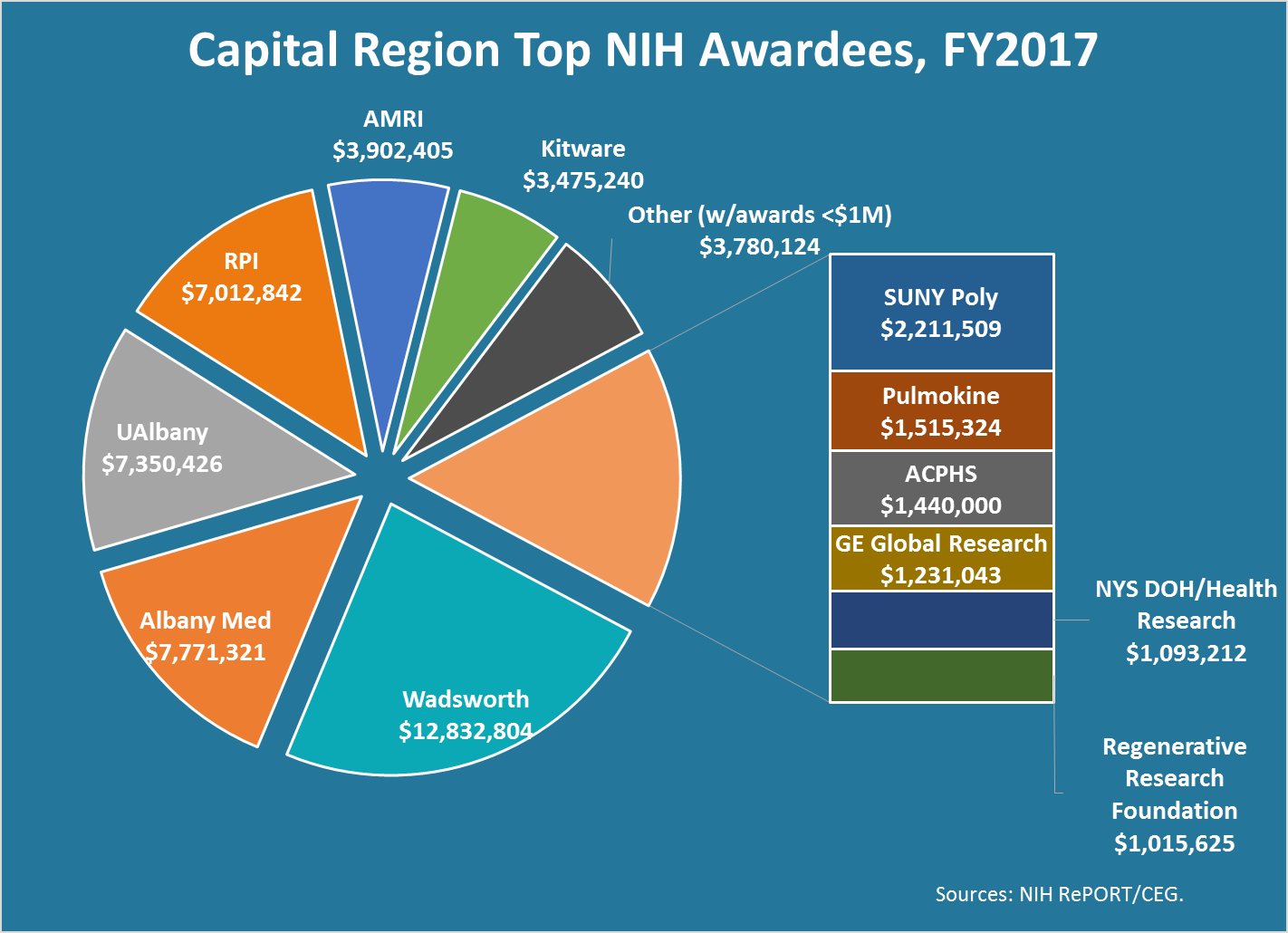 Driving last year’s growth in NIH funding were AMRI (up $2 million or 104.6 percent), the Wadsworth Center (up $1.3 million or 10.8 percent), the Albany College of Pharmacy and Health Sciences (up $960,000 or 200 percent) and SUNY Polytechnic Institute (up $779,524 or 54.4 percent). With $12.8 million from 25 awards, the Wadsworth Center led the region in both NIH awards and total funding. That marked Wadsworth’s largest NIH haul since fiscal 2012, and it came as the state Department of Health is preparing to consolidate the center’s five laboratories in the region into a single campus.

My Music Machines, a Scotia-based startup, emerged as the region’s fastest-growing NIH awardee, experiencing a 344.2 percent annual increase in funding. The firm received $999,500 in Small Business Technology Transfer (STTR) Phase II funding to develop a respiratory therapy that “uses interactive gaming and music to encourage patient compliance.” The firm’s Jamboxx technology is designed to help post-operative surgery patients as well as people suffering from quadriplegia and other spinal cord injuries; high-level motor neuron diseases, such as ALS and multiple sclerosis; and disorders such as cystic fibrosis.

HocusLocus, a SUNY Poly startup and UAlbany spinoff that focuses on post-transcriptional regulation of RNA, secured a $733,710 STTR Phase II grant. That grant was the largest of the five it has received from NIH since 2011. The funding will support efforts to leverage post-transcriptional regulation to replace antiquated bio-manufacturing techniques and improve the production yield of biological products such as antibodies, vaccines and proteins by up to 50 percent.

Simmetrix, a Clifton Park software developer, also received its first NIH grant. Traditionally, Simmetrix has provided simulation-based design engineering solutions to manufacturers and advanced R&D firms. But in fiscal 2017 Simmetrix received $149,448 from NIH for the improvement and automation of the 3D traction force microscopy process. Those developments aim “to quantify cellular tractions that can be used to better understand the role of tractions in biomechanical signaling and in the design new therapeutic interventions that target these pathways.”

In its 2017 Progress Report, the Capital Region Economic Development Council (CREDC) identified CEG as playing a vital role in supporting the state initiative of growing the area’s life sciences cluster. Under the CREDC’s Life Sciences Cluster Plan, the CREDC said CEG will leverage its 14-year-old life sciences Bioconnex network, its National Institute for Standards and Technology (NIST) Manufacturing Extension Partnership (MEP) center and its status as an Innovate 518 operational partner to do the following:

CEG will also continue to develop this cluster’s talent pipeline through its programming geared toward training workers for careers in advanced manufacturing and Bioconnex’s speed mentoring events for local college students to engage with employees working in the life sciences sector.

* Not included in the regional NIH funding total are grants awarded to out-of-region institutions but that have local principal investigators, such as an Albert Einstein College of Medicine grant that will support research at SUNY Poly for the development of an imaging device for the measurement and control of tumor microenvironments.