Academic research and development expenditures at Albany-Schenectady-Troy metropolitan statistical area (MSA) higher education institutions increased over the year by more than $28 million, or 5.4 percent. In fiscal 2016, eight local colleges and universities spent a total $562.4 million on R&D, with more than four-fifths of that amount going toward life science and engineering innovation, according to a Center for Economic Growth analysis of National Center for Science and Engineering Statistics (NCSES) data.

In fiscal 2016, three institutions – SUNY Polytechnic Institute, University at Albany (UAlbany) and Rensselaer Polytechnic Institute (RPI) – each spent more than $100 million on R&D. Driving up the Albany-Schenectady-Troy MSA’s academic spending was R&D in environmental sciences, which was up 69.5 percent to $20.7 million, and engineering, which was up 3.8 percent to $374.4 million. A  760.5 percent increase in non-science and engineering R&D spending to $22.2 million, largely at UAlbany, also boosted the metro area’s fiscal 2016 expenditures total. Non-science and engineering R&D includes subfields such as business, education, communication and social work. Environmental sciences include geosciences, atmospheric sciences and ocean sciences.

At $312.2 million, SUNY Poly was the region’s biggest spender on engineering. That also made SUNY Poly the nation’s fourth biggest engineering R&D spender, trailing only John Hopkins University, Georgia Institute of Technology and the Massachusetts Institute of Technology. SUNY Poly’s engineering R&D ranking moved up from sixth in fiscal 2015. UAlbany last fiscal year spent $17.1 million in atmospheric science R&D, up from $9.4 million in fiscal 2015. That 82.3 percent increase sent UAlbany’s ranking in this field to 47 from 77. 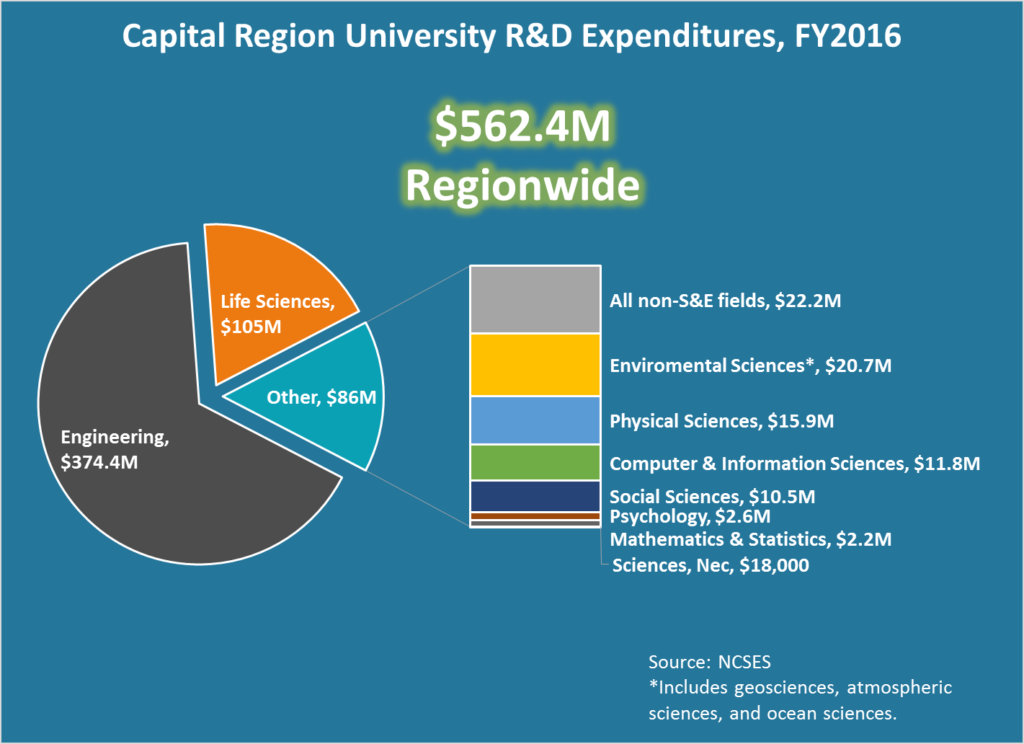 Regionwide, that R&D spending supported 656 principal investigators and 3,324 other personnel, totaling 3,962. Total personnel, not including nearly 180 postdocs, was up 8.5 percent from fiscal 2015. RPI experienced the metro area’s greatest annual increase in total personnel: 469 additional personnel, or up 33.1 percent, to 1,884. RPI employs nearly half (47.6 percent) of the metro area’s academic R&D personnel.

Among the 32 Northeastern MSAs with colleges and universities for which NCSES reported R&D expenditures, the Albany-Schenectady-Troy MSA had the eighth highest total academic R&D expenditures, right behind the State College/Harrisburg-Carlisle* and before the Providence-Warwick MSAs. At $4 billion, the New York-Newark-Jersey City MSA was the Northeast’s top academic R&D spender. However, when taking into account the size of each metro area’s economy, as measured by their gross metropolitan product (GMP), it becomes apparent that large metros are not spending on R&D as intensely as their smaller counterparts. This metric is referred to as “R&D intensity.”** 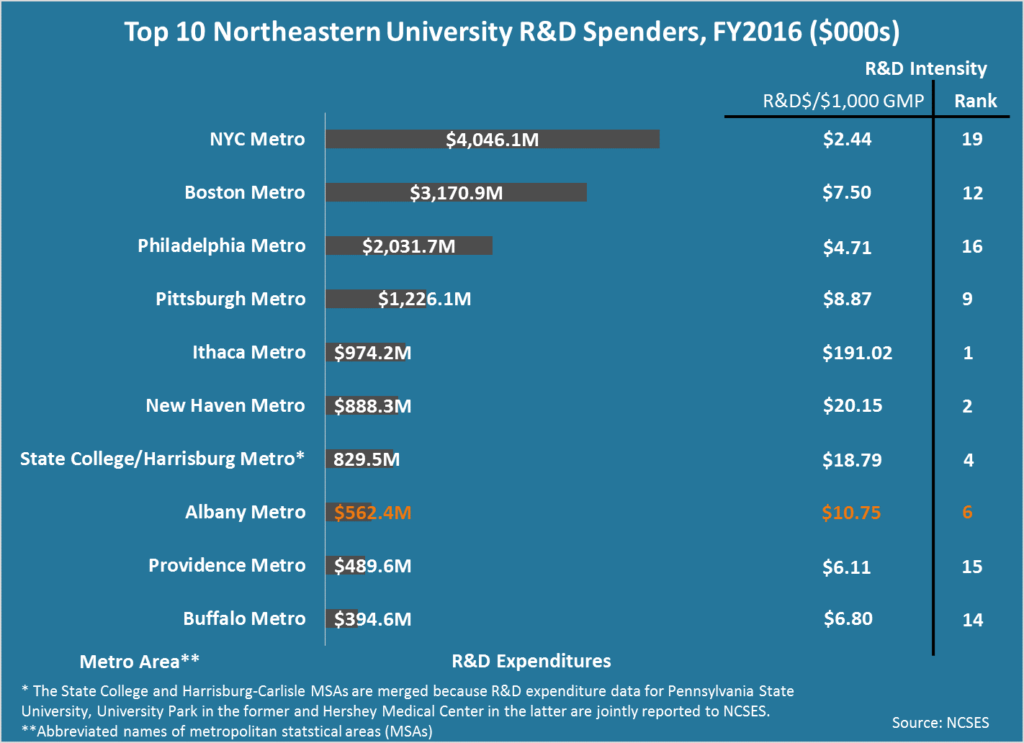 The Capital Region’s R&D infrastructure is one of its most powerful draws to companies in the semiconductor, life sciences and cleantech industries. CEG and its Business Growth Solutions (BGS) unit leverage these R&D assets to do the following:

Promote the region around the world at industry conferences. Upcoming events at which CEG staff will represent the region include the Industry Strategy Symposium (ISS), the BIO CEO & Investor Conference, the Select USA Canadian International Auto Show, the NY-BEST Annual Meeting and Conference and the Site Selector Guild’s Annual Conference.

Develop prototypes with a Stratasys F270 3D printer or providing hand-on access to it;

* The State College MSA includes the Harrisburg-Carlisle MSA because R&D expenditure data for Pennsylvania State University, University Park in the former and Hershey Medical Center in the latter are jointly reported to NCSES.