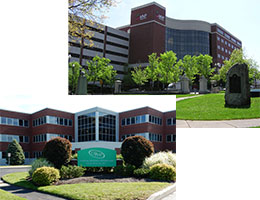 The Capital Region’s health insurance industry last year realized its second largest annual gain in jobs in more than two decades and grew to record employment. Even more, the area’s health insurance industry now stands as the 11th largest in the country by employment and the third most concentrated, according to a Center for Economic Growth analysis of data from the U.S. Bureau of Labor Statistics (BLS).

In addition to having one of the largest direct health and medical insurance carrier industries by employment, the area also has one of the highest health insurance coverage rates and is one of the most competitive/unconcentrated markets, according to a CEG analysis of data from the American Medical Association (AMA) sand U.S. Census Bureau.

“CDPHP is proud to be a not-for-profit health care company founded and led by doctors with deep roots in our community. For nearly 40 years, we’ve cared for members in all product lines with an ultimate goal of making them happy, healthy, safe, and secure,” said John D. Bennett, MD, president and CEO of CDPHP. “We are pleased to play a major role in driving the health and vitality of our regional economy, and look forward to doing so for many years to come.”

“At MVP Health Care, we’re proud to call the Capital Region home. CEG’s new report reinforces the health insurance industry as a critical driver of economic growth and employment in our community,” said Amy Harlow, MVP Health Care’s chief of talent. “At MVP, our employees are the beating heart of our organization and a guiding force behind the excellent health care we offer to our customers. We’re so proud to say that we are a major influence on the local workforce and look forward to continuing to improve the health and well-being of the communities we serve.”

In 2021, both the eight-county Capital Region and five-county Albany-Schenectady-Troy metropolitan statistical area (MSA) had 6,680 jobs in their direct health and medical insurance carrier industry. That industry includes health insurers such as CDPHP, MVP Health Care, Empire Blue Shield of Northeastern New York and Fidelis Care. That was an annual gain of 368 jobs (5.8 percent), trailing the record annual gain of 519 jobs set in 2018. Last year’s gain also more than offset the annual 250-job loss the area experienced during the pandemic in 2020. Since the enactment of the Affordable Care Act in 2010, direct health and medical insurance carrier employment in the area and nation has been on a growth trajectory. 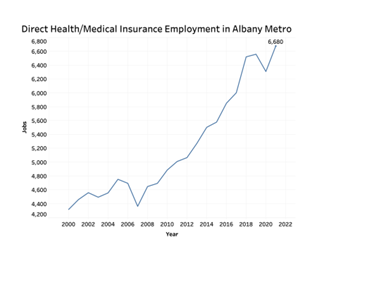 In the Albany-Schenectady-Troy MSA, direct health and medical insurance carriers in 2021 paid $671 million in total annual wages and $100,444 in average annual wages.

Among 80 metro areas for which annual direct health and medical insurance carrier employment is reported, the Albany-Schenectady-Troy MSA has the 11th most jobs in this industry. It also has the third highest concentration of these jobs with an employment location quotient of 5.74, trailing the Louisville-Jefferson County and Harrisburg-Carlisle metro areas. 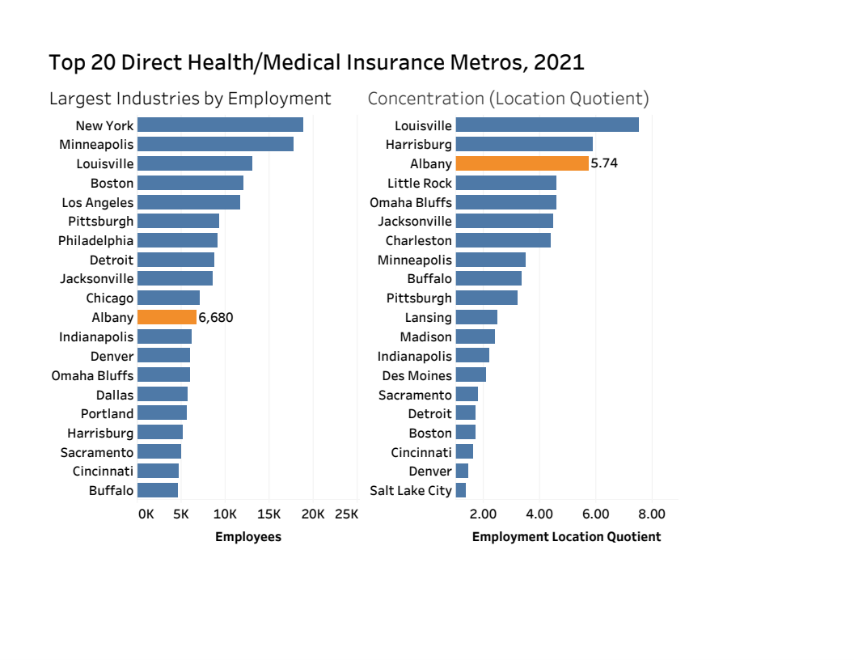 The area’s health insurance market is also highly competitive, based on data in the AMA’s latest Competition in Health Insurance report. According to the AMA, small increases in market concentration (through mergers) “are unlikely to have adverse competitive effects,” whereas larger increases “potentially raise significant competitive concerns.”

On top of being highly competitive, the regional market is very insured. In 2021, 96.6 percent of the Albany metro’s civilian population were covered by health insurance, according to one-year, American Community Survey estimates. That was the 16th highest insured rate among more than 500 metropolitan and micropolitan statistical areas.