Fueled by gains in computer science and engineering technologies, the Capital Region’s ranks of women STEM graduates increased over the year by 7.4 percent in 2017. That year, women received 1,153 STEM degrees from the eight-county region’s traditional colleges and universities. On top of that, they received 1,221 STEM-related health profession degrees, a 0.7 percent decline from the previous year, according to a Center for Economic Growth (CEG) analysis of data from the Integrated Postsecondary Education Data System (IPEDS).

The growth in STEM degrees holds promise for the hundreds of girls who will participate in the seventh annual Girls in STEM at Hudson Valley Community College’s TEC-SMART campus in Malta on April 13. Girls in STEM is made possible through a collaboration between AT&T, Hudson Valley Community College, Saratoga County Prosperity Partnership, CEG and other local partners. 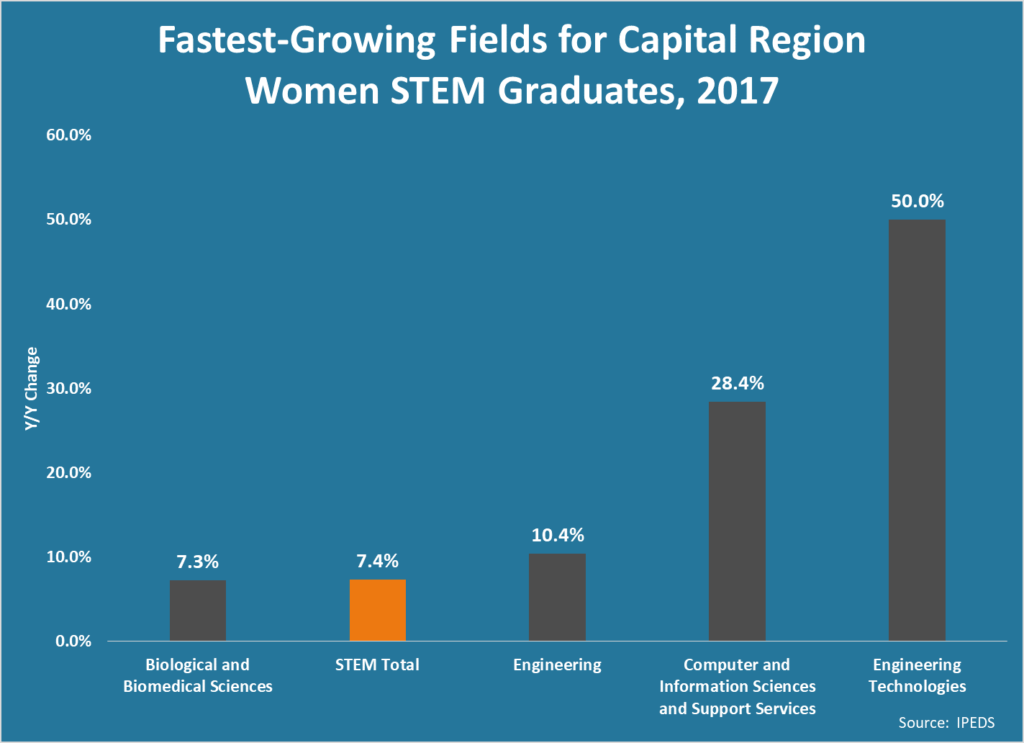 With a 14.8 percent year-over-year increase to 435 degrees, Rensselaer Polytechnic Institute (RPI) drove the region’s growth of women STEM graduates. RPI also had the greatest number of women STEM degrees, followed by the University at Albany at 290.

On top of these women STEM degrees, the two distance-learning institutions based in the region – Excelsior College and SUNY Empire State College – had an additional 156 women STEM graduates, up 38.1 percent from the previous year. Their total of women STEM-related health profession degrees declined by 1.8 percent to 1,341.

Throughout the region’s eight counties, more than 9,000 women work in STEM occupations, according to data from Economic Modeling Strategies Int. (EMSI).

Below are women STEM occupation highlights for occupations with 10 or more women jobs in the Capital Region.

Girls in STEM is just one of several initiatives in which CEG is involved to ensure the Capital Region continues to deliver the sizeable and highly skilled workforce for which it is renowned worldwide. Other initiatives include: