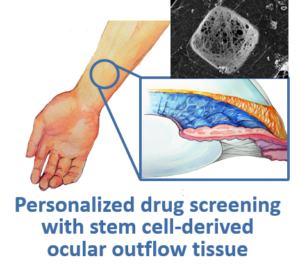 Project: The marriage of nanotechnology and stem cells has dramatically advanced our ability to discover, develop and test drugs that prevent, diagnose and treat human diseases. Researchers at SUNY Polytechnic Institute are using the state-of-the-art lab capabilities at the Albany NanoTech Complex to nanoengineer scaffolds on which to grow stem cells and coax them into differentiating into their final forms. These bioengineered systems present exciting opportunities to serve as vehicles for rapid drug and gene screening. Support this research or collaborate with the research team. 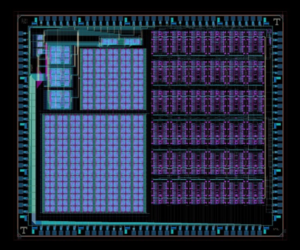 Project: Neuromorphic computing is a concept that involves designing digital systems that mimic the function of neuronal synapses in the human brain. Nate Cady, professor of nanobioscience, is designing nanoscale computer chip switches called “memristors” that combine processing and memory functions in one place. Dr. Cady’s research focuses on integrating logic and memory to achieve so-called “compute in memory” operations, which are similar to how the human brain functions. These neuro-inspired computer architectures can also perform computing tasks by breaking down information into low voltage “spikes,” which saves power and enables the chips to “learn on the fly.” Support this research or collaborate with the research team.

Exploring Energy Storage at the Nanoscale

Project: Researchers in the Energy Storage Pilot Prototyping and Testing Lab at SUNY Polytechnic Institute are developing new nanomaterials and processing techniques to produce high quality lithium ion batteries and electrochemical double layer capacitors. The enhanced energy storage electrochemical systems will lead to improvements for electric vehicles and deep neural networks. Eonix and IBM are partnering in this effort, which will play a significant role in supporting sustainable development. Support this research or collaborate with the research team. 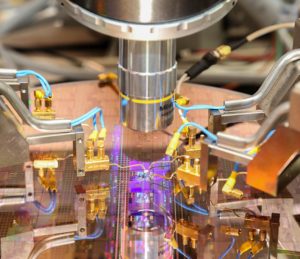 Project: Jian Shi, an assistant professor of materials science and engineering at Rensselaer Polytechnic Institute, is using pressure to create new semiconductor materials that could be used in applications such as high-performance infrared sensors and energy conversion devices. Shi’s lab grew a technologically important semiconductor material – halide persovskite – onto a specially modified vanadium dioxide substrate, capable of moving through three phase transitions under different temperatures. When combined, the vanadium dioxide and halide perskovite form a heterogenous interface, which could allow strain to be effectively transferred to the semiconductor material. With a softer semiconductor, a moderate interface, and a more dynamic substrate, the researchers were able to dynamically modify the semiconductor’s physical properties in a reversible manner at the nanoscale.

Project: By studying how electrons in two-dimensional graphene can literally act like a liquid, Ravishankar Sundararaman, an assistant professor of materials science and engineering at Rensselaer Polytechnic Institute, is paving the way for further exploration into a material that has the potential to enable future electronic computing devices that outpace silicon transistors. Graphene is a single atomic layer of graphite that has gained a lot of attention because of its unique electronic properties. Under the right conditions, electrons in graphene can flow like a liquid in a manner unlike any other material. But running experiments to create the necessary conditions for this behavior is difficult. A new method developed by Sundararaman and his collaborators will allow for more accurate observation of the hydrodynamic flow of electrons in graphene and other promising materials. 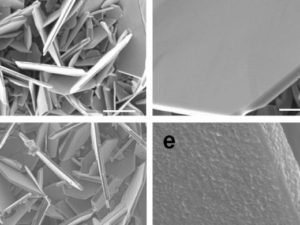 Project: Research conducted at Rensselaer Polytechnic Institute has uncovered a way to create a lithium-ion battery that can charge in a matter of minutes but still operate at a high capacity. A lithium-ion battery charges and discharges as lithium ions move between two electrodes, called an anode and a cathode. In a traditional lithium-ion battery, the anode is made of graphite, while the cathode is composed of lithium cobalt oxide. Nikhil Koratkar, professor of mechanical, aerospace, and nuclear engineering at Rensselaer, and his team improved performance by substituting cobalt oxide with vanadium disulfide (VS2). Excitement surrounding the potential of VS2 has been growing in recent years, but researchers had been challenged by its instability—a characteristic that would lead to short battery life. The Rensselaer researchers not only established why that instability was happening, but also developed a way to combat it.

Project: Researchers at Clarkson University have developed an optical method to achieve nanometer-precision sorting of colloidal particles in a liquid environment by manipulating the phase of light. The team found that the optical phase gradient can be dynamically tuned to create an optical conveyor belt where metal nanoparticles with different sizes are selectively sorted and trapped. The mechanism can also be applied to manipulate polymer microparticles and potentially cells. The long-term goal is to develop a drug delivery model for precision medicine. 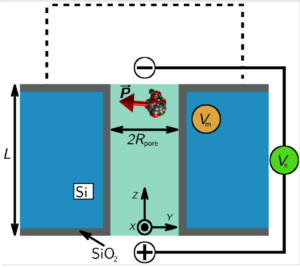 Project: Clarkson University researchers use multiscale computer simulations to model the translocation of a nanoparticle or a biomolecule through a nanopore in a solid state membrane. The primary objective of this project is to achieve an understanding of the physical processes governing the dynamic behavior of the solid-state nanopore-based devices (usually Si-based) in close contact with a biomolecule or a nanoparticle. The team aims to develop accurate computational models of novel nanopore devices capable of performing reliable biomolecule or nanoparticle sensing, characterization or manipulation.

Over the last decade nanopores have become a powerful tool for the investigation of single biomolecule dynamics. Ultra-fast DNA sequencing is one of the major goals of nanopore research because it promises a low-cost, label-free approach without the need for sample amplification with possibility of long DNA read lengths and parallelization.

The developed comprehensive models will allow researchers to study nanoscale physical phenomena at the interface between solid-state and biological matter. With these models researchers will be able to address unsolved basic questions of the nanoscale physics as well as optimize and tune the device parameters for best resolution or detection scenarios. Moreover, the computational tools could also be applied in nanofluidics and bio-mimetic research, as well as in bio-sensor research, and broadly, in the field of bio-nanotechnology.

Each edition of The Research Connection will highlight several research projects in a specific technology sector. The Research Connection will keep CEG investors (2,500+) and CEG Indicator subscribers (9,000+) informed on the cutting-edge R&D that is being conducted by SUNY and other academic researchers that could potentially transform their industries. It will also encourage collaboration, patent, licensing and other opportunities.