ALBANY, NEW YORK – More than 150 people are expected to attend an offshore wind (OSW) supplier forum event Thursday organized by the New York State Energy Research Authority (NYSERDA). At the Hilton Albany, 16 mostly European original equipment manufacturers (OEMs) in the OSW industry will meet one-on-one with upstate manufacturers interested in becoming part of the supply chain for wind farms off of Long Island that will generate up to 800 megawatts. CEG is supporting the supplier forum, along with its partners: Fuzehub, Port of Albany, Port of Coeymans, Workforce Development Institute and National Grid.

Following the November 2018 issuance of a large-scale OSW solicitation, NYSERDA is expected to soon announce two winning bids. NYSERDA last February had received multiple proposals from four OSW developers that ranged from 400 MW to 1,200 MW. With the solicitation for OSW projects placing a premium on developers intending to include New York companies in their supply chain, the selection of any local manufacturers or ports could plant the seeds for a new growth industry in the Capital Region. That is because the 800 MW covered under this New York solicitation is only a fraction of the 18,642 MWs from OSW projects along the East Coast that are expected to go under contract through 2030.

“We have an opportunity to the lay foundation for a new major manufacturing industry with offshore wind. The OEMs we’ve met with have been surprised and impressed the Capital Region’s port infrastructure and manufacturing capabilities. It would be a boon for the regional economy if they get included in the OSW supply chain,” said CEG President and CEO Andrew Kennedy.

In 2016, the U.S. Bureau of Ocean Energy Management identified more than 50 coastal ports mostly in 18 metropolitan statistical areas (MSAs) from Boston to Savannah, Georgia as having potential for being OSW staging or operations and maintenance (O&M) facilities. Since then NYSERDA has identified in New York 10 coastal ports as well as two inland ports in the Capital Region: the Port of Albany and Port of Coeymans. In fact, a December 2017 NYSERDA report said, “Both facilities have experience supporting on-site manufacturing and fabrication clients and have supported OSW projects. With minor to moderate upgrades, both facilities are potentially viable OSW manufacturing and fabrication ports.”

A March 2019 University of Delaware study estimated 1,750 OSW turbines and substation foundations would have to be developed to support the 18.6 GW projected for 2030. That infrastructure will need mechanical systems, towers and foundations, blades and nacelle covers electronic systems and components, and foundries. The eight-county Capital Region has more than 12,450 employees in industries relevant to these OSW components, according to data from EMSI. 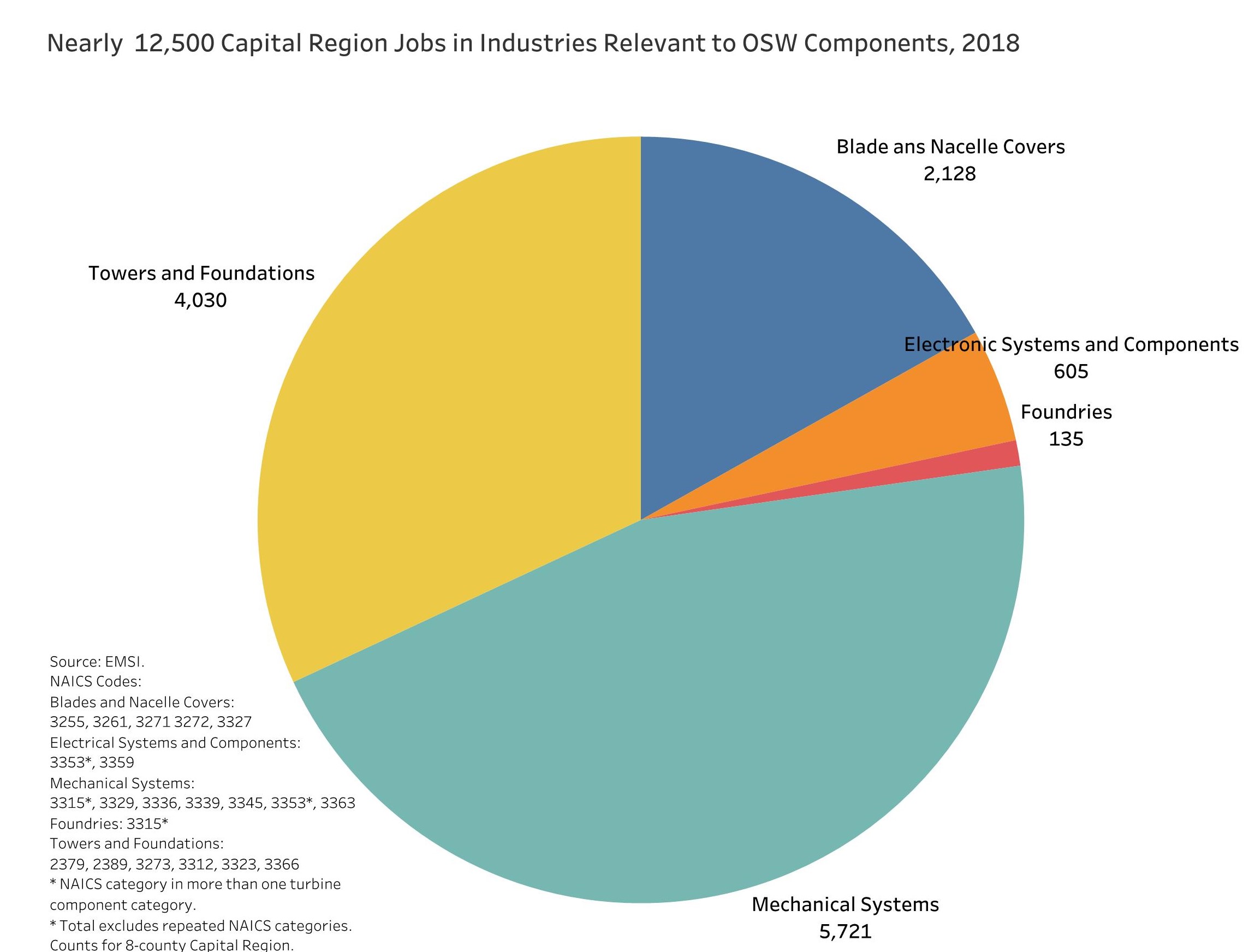 With NYSERDA identifying the Port of Coeymans as a potential site for the manufacturing of manufacturing facility for gravity-based foundations and jacket foundations, which are both made of steel, welding will be a critical skill for workers in the area. When compared to the eight Northeast MSAs with potential OSW ports and at least more than 400 of these workers, the five-county Albany-Schenectady-Troy MSA has the fourth lowest average hourly wage for welders, cutters, solderers and brazers ($23.06). Additionally, welding training programs at Capital Region BOCES’s Center for Advanced Technology and Modern School of Welding ensure the region has a talent pipeline for these vital OSW component positions. 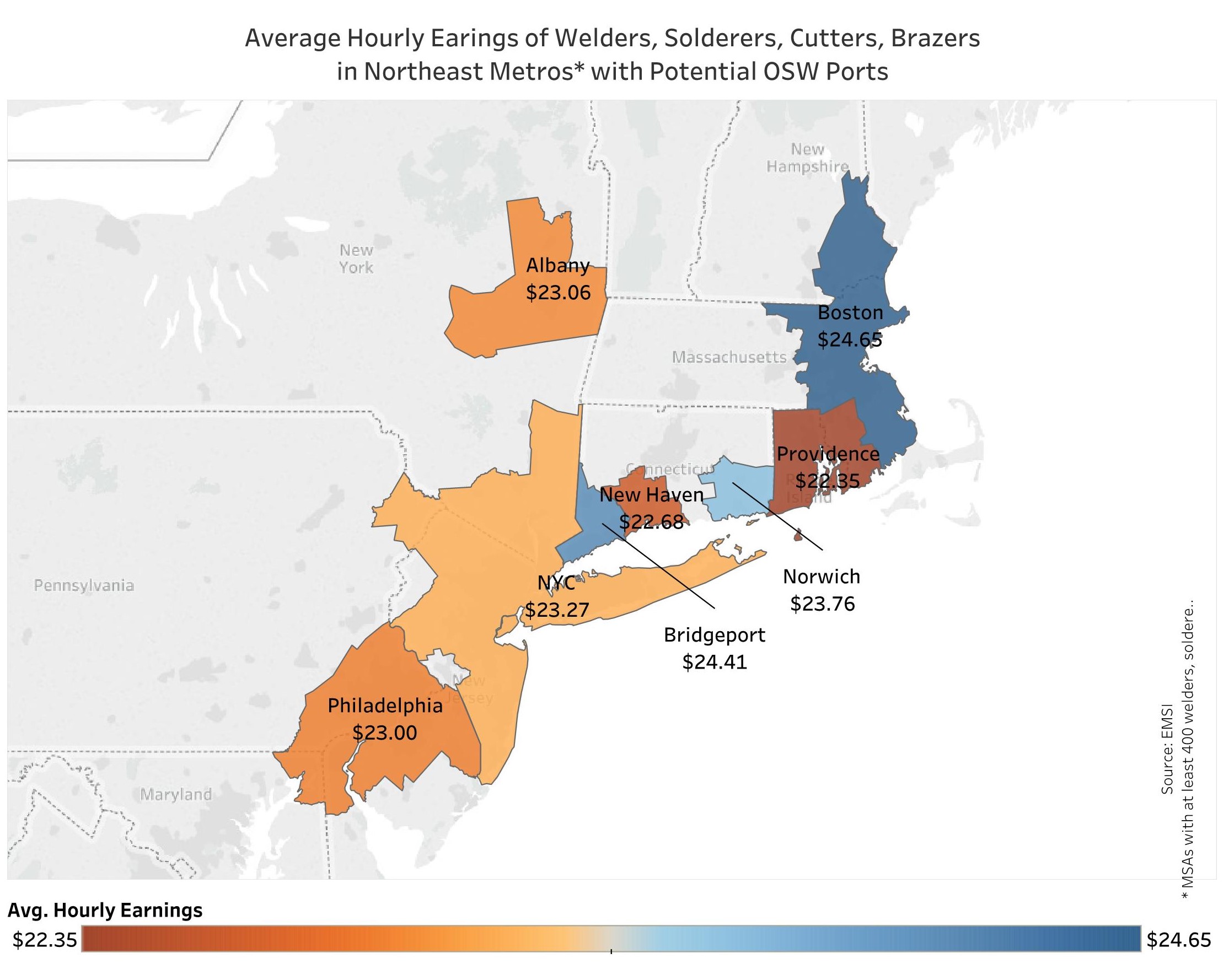 New York also has a competitive advantage over many of the East Coast state with potential OSW ports when it comes to industrial electric rates and state corporate income tax rates. Among the 11 East Coast states, New York has the lowest average industrial electric rate ($5.63 KWH) and fourth lowest maximum corporate income tax rate (6.5 percent), according to data from the U.S. Energy Information Administration and Tax Foundation. 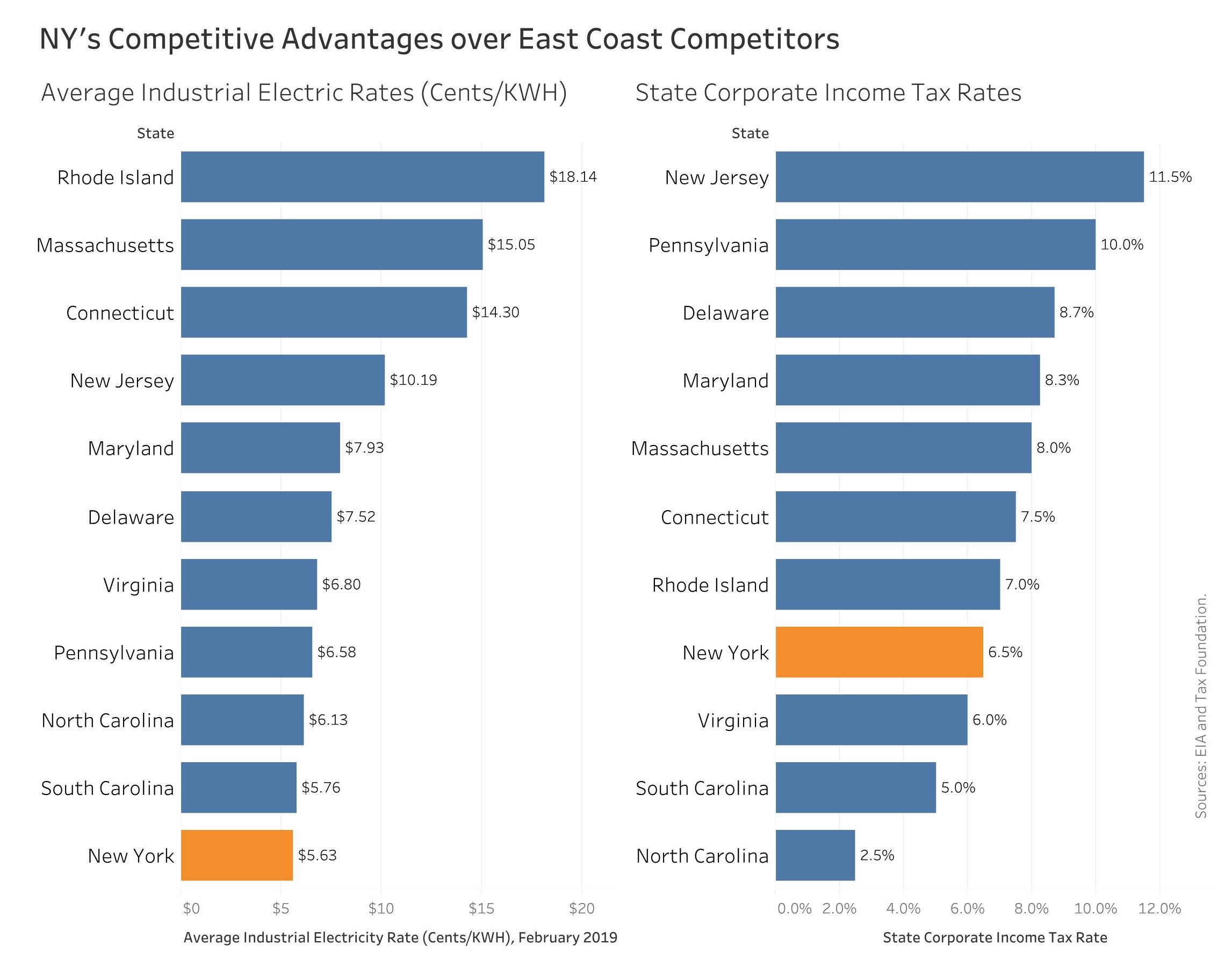 CEG has been working with the Port of Albany and Port of Coeymans as well as local manufacturing and supply companies to engage OSW developers and companies looking to establish operations in the U.S. market. Additionally, CEG has been involved in the following activities to position the Capital Region as a major player in the OSW supply chain:

Connected with 10 OSW OEMs and familiarized them with the Capital Region’s assets and made introductions with local port representatives;

Identified over 45 Capital Region manufacturers, workforce, consumables, and engineering companies that have potential to participate in the OSW industry; and

Identified OSW industry-required certifications and working to procure grant funding from NYSERDA to offset the cost of attaining such credentials for Capital Region. CEG will deliver this service through its Business Growth Solutions unit, a National. Institute of Standards and Technology (NIST). Manufacturing Extension Partnership (MEP) center.

For more information about OSW opportunities in the Capital Region, contact CEG BGS Director, of  Energy & Sustainability Peter Lion at 518-465-8975 extension 234 or peterl@ceg.org.

The Center for Economic Growth (CEG) is the Capital Region’s primary regional economic development organization, with over 250 investors in business, government, education, and the not-for-profit sectors. CEG is a New York Empire State Development Division of Science, Technology and Innovation-designated Regional Technology Development Center and an affiliate of the National Institute of Standards and Technology (NIST)/Manufacturing Extension Partnership (MEP).