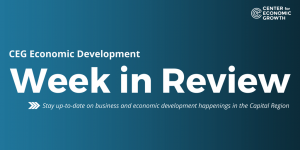 The hub, a project spearheaded by Schaghticoke native Rachel Czub, would buy, process and store crops from farms and sell them to breweries and distilleries, streamlining the process for both parties. The facility would contract directly with farms to grow certain grains and breweries would be able to place custom orders for specific crops.”

“A high-tech moving and storage company is planning to expand in Malta for the second time in a year.

Arnoff Moving & Storage, which moved from Albany to Stonebreak Road in Malta earlier this year, is planning a $4.7 million expansion that will add another 20 jobs over the next three years, on top of the 73 jobs there now and another 34 already expected to be created in the wake of the move.”

“The Capital Region is doing better than the state and nation with a higher median income, a lower poverty rate and more people with health insurance coverage in 2016 than the year before, according to the latest survey data released Thursday by the U.S. Census Bureau.

The Albany-Schenectady-Troy Metropolitan Area residents are earning more as their median income increased 4.4 percent to $65,855 in 2016 from $63,080. That’s 11.5 percent higher than the national median income of $59,039 and 4.5 percent higher than the state’s income level of $62,909, according to data from the American Community Survey 2016 estimates.”

Private sector jobs were up 400 while public sector jobs saw a gain of 1,200, although state labor markets analyst James Ross said he believed the private sector actually had larger increase while the public sector’s gain wasn’t as strong, based on preliminary data from a separate Quarterly Census of Employment and Wages.”

“Two conceptual scenarios were presented today to redevelop parking lots and empty buildings in downtown Albany, New York — land that has languished for years as plans for a convention center there came and went.

“The founder of Halfmoon-based nfrastructure Technologies offered a bright vision for his company and the region at a Thursday business luncheon event at the New York BizLab.

CEO Dan Pickett said the information technology firm is in the midst of expanding into a massive new space in Menands. He said the company has about 500 employees in the Capital Region and has openings for 100 more employees now.”

“Graybar Electric is considering a move from Albany to Halfmoon that would nearly double the switch and lighting supplier’s operations center in New York’s Capital Region.

Graybar employs 8,500 at 290 locations throughout the United States and Canada. The company has had a presence in the Albany region since 1929 and employed at least 38 people here as of last spring.”

The upgrades to the 7,000-foot-long runway in Scotia, New York, were approved at last night’s regular meeting of the legislature.”

“A dust cloud rises as a train rumbles by, its horn belching a warning that reverberates against the brown and rust colored facade of the ancient factory. Workers pause for a minute to lift handkerchiefs across their faces. These men are here laying down grass seed to combat these wild-west styled dust storms from lashing the faces of future visitors. A few feet away another group saws and hammers, preparing some sort of new infrastructure–a stage perhaps, maybe a countertop. There’s a flyer posted on the building that reads, “Escape Existence. Visit Hudson.” Sure, this could be the opening scene of a post-apocalyptic epic, but Basilica actually represents the opposite. It represents the reclaiming of an abandoned space, an increase of interest in a once-forgotten city, a show space for artists who don’t want to play by the rules. The activity here today at Basilica Hudson certainly doesn’t match the clamor and clang that was once produced when the building was active as a factory, but there is life here in the middle of a weekday in June, and there isn’t a single concertgoer in sight.”

Skidmore College was noted as the best A-plus School for B students, a designation given to top-rated schools that often accept students with less-than-stellar standardized test scores and grades.”