The Capital Region averaged an unemployment rate 3.8 percent last year – the lowest annual rate since 2001. That also continued a trend that has been playing out for more than a quarter of a century in which the eight-county region’s rate has registered below the nation’s, according to a Center for Economic Growth (CEG) analysis of data from the New York State Department of Labor and U.S. Bureau of Labor Statistics. 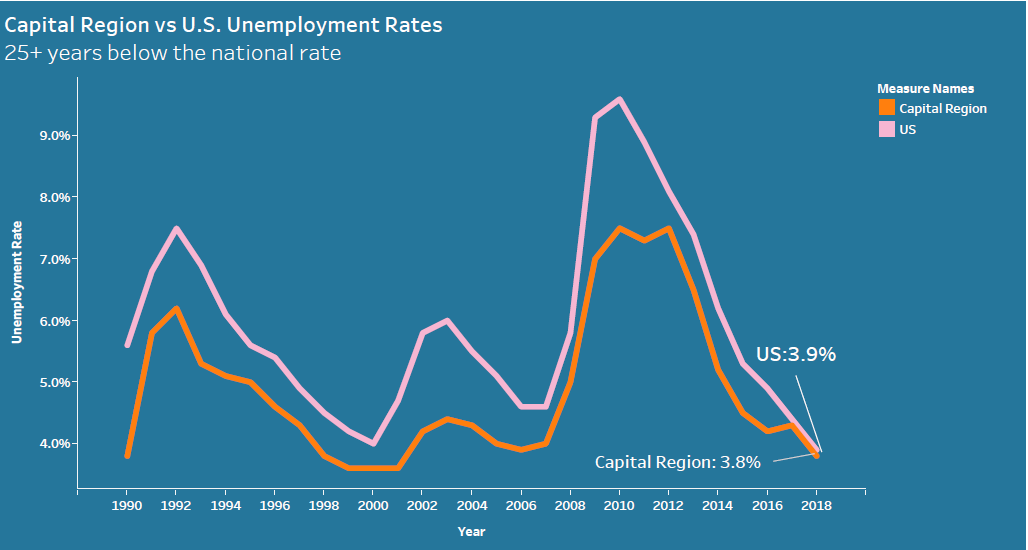 Helping the region achieve this low annual unemployment rate – the second lowest among New York’s 10 economic development regions – was nine consecutive months of sub-4 percent rates. That last time the region saw a streak that long was the nine-month run between February and October 2001.

Driving down the number of unemployed workers was that of employed workers. At 526,600, the region’s ranks of employed was the highest it has been since 2008. A greater number of job openings in the region fueled this employment growth as well as helped attract more workers into the labor force. In 2018, the region averaged 10,979 beginning-of-the-month job postings per month, up 3.9 percent from the previous year and up 12.6 percent from 2016.

CEG is engaged in the following activities to expand and enhance the Capital Region’s talent pipeline:

Veteran Connect Center (VCC): A program dedicated to attracting to the region transitioning service members stationed around the word and to retaining the veterans already here.

Upstate Alliance for the Creative Economy (ACE): A partnership that aims to ensure the region has a thriving creative economy that will not only provide more employment and freelance opportunities but also enhance efforts to attract outside talent and retain the skilled workers already here.