Five years after New York State launched an initiative to expand its ranks of craft beverage producers through the introduction of a license for farm breweries and later for farm cideries, that industry is thriving in the Capital Region. In fact, throughout the eight counties there are 59 breweries and distilleries as well as 32 wineries and cideries, according to a Center for Economic Growth (CEG) tally of active license data from the New York State Liquor Authority.

In sum, as of late October, there were more than 90 unique craft alcoholic beverage producers with active licenses in the Capital Region. Craft beverage licenses are also pending for several more producers throughout the region. New York’s farm brewery license law was enacted in October 2012, and the farm cidery license law was enacted in October 2013. Legislation reducing the regulatory burdens imposed on farm wineries was earlier enacted in July 2011.  (Note: Joint brewery/distillery and cidery/winery operations are not double counted in these totals. Counts do not distinguish between farm and nonfarm operations). 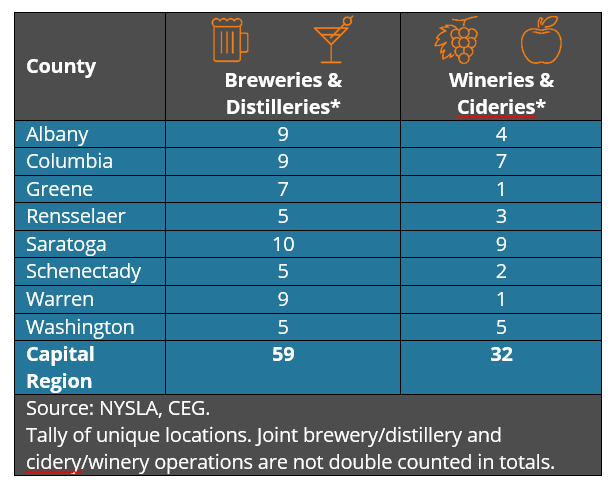 In the Capital Region, Saratoga and Warren counties were tied for the most breweries (5), and Columbia County had the most distilleries (8). Saratoga County had the most wineries (8) and Columbia County had the most cideries (3). The Capital Region’s craft beverage producers have been pioneers in New York State. For example, Ledge Rock Hill Winery was the first winery to use Adirondack-grown grapes in an award-winning dry red wine. In 2014, Nine Pin Ciderworks became the first licensed cidery in New York State under the State’s Farm Cidery bill, which enabled licensed farm cideries to use state-grown crops for the production of craft cider. Additionally, the American Distilling Institute (ADI) and Travelocity recently named the Glens Falls metropolitan statistical area (MSA) as the nation’s ninth top small metro for craft spirits tourism in their Craft Spirits Tourism Index.

Below is a sampling of some – not all – of the Capital Region’s award-winning breweries, distilleries, cideries and wineries:

The Capital Region’s five-year economic development plan, Capital 20.20, identified agriculture, food, and tourism as priority industries in rural economies that are “ripe for innovation.” Advancing that objective are Capital Region Economic Development Council (CREDC)-supported projects, such as the following current and past priority projects, which are mostly featured in the council’s 2016 and 2017 Progress Reports.

Several of these projects advance the state’s placemaking priority while also making the region more appealing to young professionals. Further supporting the growth of the region’s craft beverage industry are craft brewing certificate programs at SCCC and SUNY Adirondack.