The Capital Region’s biotech sector saw a 13.5 percent year-over-year increase in National Institutes of Health (NIH) awards in fiscal 2018. Between 20 firms and institutions, the region received 154 awards totaling $62 million. That was the eight-county region’s largest amount of NIH since fiscal 2013, according to a Center for Economic Growth (CEG) analysis of data from the NIH Research Portfolio Online Reporting Tools (RePORT).

The Capital Region awardee with the biggest annual increase of NIH funds (by value) was the University at Albany, which received $12.8 million. That was up $5.4 million from the previous year and the university’s largest NIH award total since fiscal 2004, when it received an inflation-adjusted (2018 dollars) $13.5 million. Other awardees with big year-over-year funding gains were GE Global Research in Niskayuna (up $2.8 million to $4 million), the New York State Department of Health’s Wadsworth Center (up $2 million to $14.8 million) and the Albany College of Pharmacy and Health Sciences (up $1.3 million to $9.1 million). 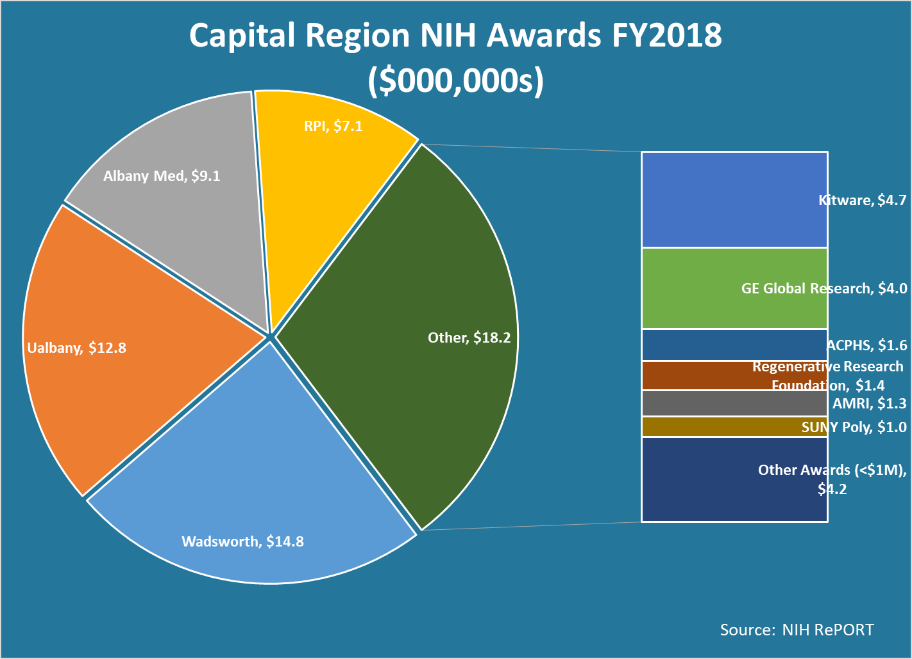 Lightweight, compact, low-cryogen, head only 7T MRI for high spatial resolution brain imaging, GE Global Research, Niskayuna ($1,595,659): For the development of an innovative MRI system that will deliver “spatial resolution that is difficult to achieve with today’s whole-body 7T systems…. for high spatial resolution imaging of brain microstructure, functional brain activation, arterial and venous vasculature, and to profile brain metabolites that are critical to neurotransmission and brain function, especially in regions of the brain that have previously eluded researchers due to resolution and susceptibility limitations.”

Symbiotic-based discovery for a safe selective antifungal therapy, Symbiotica, Schenectady ($150,000): For the development of “a novel natural product antifungal, selvamicin, targeting drug-resistant fungal infections….The goals of this Phase 1 project are to further develop a drug from a promising new antifungal class to address this unmet clinical need for growing immunocompromised patient populations.”

Targeting biological, behavioral, and social processes to prevent violence in social networks, University at Albany, Albany ($463,214): “The overall objectives of this proposed project are to characterize the biological, behavioral, and social processes across the life course that contribute to violence within social networks and to test alternate strategies for preventing violence.”

Light, metabolic syndrome and Alzheimer’s disease: a non-pharmacological approach, Rensselaer Polytechnic Institute, Troy ($839,256): For “a light treatment designed to promote circadian entrainment and reduce inflammation and restore metabolic control will lead to improvements in sleep, measures of depression, glucose homeostasis and insulin action, which in turn will reduce brain insulin resistance and improve cognitive outcomes. The research holds strong potential to contribute to the scientific understanding of both diseases while also providing significant improvements to quality of life among those suffering from AD [Alzheimer’s disease] and ADRD [Alzheimer’s disease and related dementias].”

CEG and the Life Sciences Cluster

Marketing the Capital Region’s life sciences R&D assets at talent pipeline at events such as the New York BIO Annual Conference and MD&M East in New York, the BIO International Convention in Boston, and The MedTech Conference in Philadelphia.

Helping biotech firms, such as Vital Vio, grow through a suite of Business Growth Solutions, such as continuous improvement, technology acceleration, energy and sustainability, supply chain development and workforce initiatives.