Between 2012 and 2017 the Capital Region’s large rural counties gained farms, but the area’s total agricultural footprint shrunk during that period due to losses in more urban counties, according to a Center for Economic Growth (CEG) analysis of new data from the U.S. Department of Agriculture’s National Agricultural Statistics Service (NASS).

NASS’s 2017 Census of Agriculture shows the eight-county region had 3,405 farms with 560,829 acres in operation, a decline of 2.1 percent and 4.9 percent, respectively, since the last count in 2012. Despite the decline of 71 farms regionwide, those that remained reaped $81.7 million in total net income, or an average $23,990. That total net income was 27.2 percent more than what the larger pool of operations had reported in 2012. Helping farmers achieve these income gains was their continuing shift to more lucrative agricultural products as well as a 10.6 percent increase in the value of their machinery assets to $376.9 million.

All of New York’s economic development regions (not counting the New York City Region) saw their number of farms decline during the period of the censuses, but the Capital Region lost them at the slowest rate. The North Country was the only region to grow its amount of farmland in operation, and the Capital Region ranked sixth for this type of growth.

Washington, Saratoga and Columbia counties – the region’s three largest agricultural counties by acreage – saw their ranks of farms increase by 7.5 percent, 1.4 percent and 4.9 percent, respectively. At 915, Washington County has the most farms, followed by Saratoga County at 591 and Columbia County at 518. Schenectady County, the region’s second smallest county by acreage, saw its ranks of farms rise by 9.5 percent to 185. Farm losses were steepest in Warren, Greene and Albany counties at 31.6 percent, 24.5 percent and 10.9 percent. 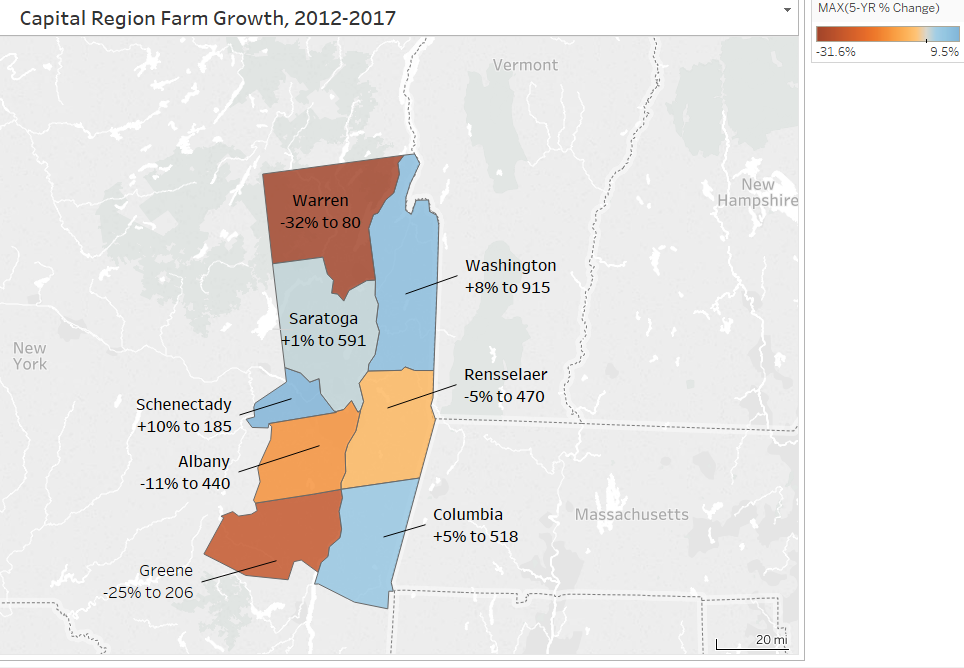 Only two counties, Columbia and Warren, added farmland between 2012 and 2017 at  rate of 4 percent and 5.9 percent. Greene County experienced the steepest decline in farmland at 18.6 percent, followed by Schenectady County at 12.6 percent.