CEG’s 2019 Tech Awards will be held on Thursday, June 27 from 4:30 – 7:30pm at Rivers Casino in Schenectady. Join 100s in celebrating our region’s brightest minds, innovators, researchers, technologists and organizations making a difference in our community and beyond by advancing technology across multiple industry sectors that affect our lives. 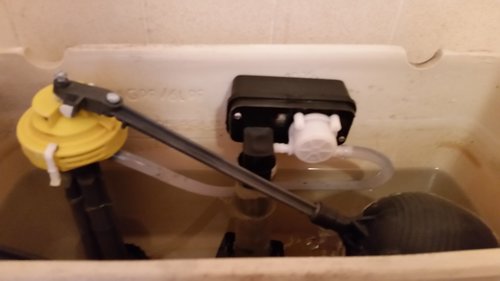 Originally, a computer science engineer had an idea for a startup: a showerhead that conserves water by throttling back the water flow when a person backed away from the shower. During the summer of 2014, he formed a company called Möbius Labs to advance that idea. The team developed the showerhead and tested it, but it quickly became apparent that potential customers did not like the proposed solution: just because they backed away from the flow of water, didn’t mean they wanted it to slow or stop.

At the time, Möbius was a startup trying to solve a problem that users did not want fixed. However, the startup had already been admitted into the National Science Foundation (NSF) I-Corps Sites program. After interviewing hundreds of staff at hospitality and condominium properties nationwide, the Möbius team learned about a more pressing problem for which the industry desperately wanted a solution:  leaky toilets. Fortunately, in their interviews they learned there were other engineers nearby already trying to solve this problem.

“That was where we had a eureka moment,” said Karl Appel, a Möbius co-founder and software lead. After graduating from Siena College in 2014 with a degree in computer science, he went to RPI (just as Möbius was forming) to study Technology Commercialization and Entrepreneurship with a desire to concentrate in the field of Artificial Intelligence.

The team went on to interview 500 more staff at hotels and insurance companies. The complaints about leaky toilets were a common refrain because if a hotel toilet does not stop running after being flushed, hotel patrons would likely do little more than jiggle the handle. According to Water Matrix, a toilet that keeps running for just one hour could waste 20 to 40 liters, or 175,000 to 350,000 liters of water annually. That is enough water to fill a swimming pool, costing up to $556. This is called a minor leak. And that’s only one toilet. Imagine the size of the problem in a hotel with hundreds. On top of this waste issue, there are the costs related to recycling the water in our sewer system and damage caused by water.

Möbius underwent a transformation as the engineers began working together and morphed into a company that was less interested in creating a shower device and more focused on developing a platform for any fixture, driven by software to detect and predict leaks. Around 2017, with the support of the new founders and a $225,000 Small Business Innovation Research (SBIR) grant from the NSF, they developed an Internet of Things (IoT) Smart Water Management System (SWMS) that “will use artificial intelligence and machine learning to identify leaks so they can be corrected before wasting precious water and energy.” They likened it to a “simple ‘smoke alarm for your water’ like warning of a fault coupled with a robust analytics platform.”

“We could not have gotten to this point without the NSF or SBIR,” said Appel.

The R&D enabled Möbius to create FirstDrops™, a device that fits inside the toilet, where it monitors parameters such as water pressure, temperature and flow rate. The device takes 90 seconds to install and can connect to Wi-Fi to report data for the software. It is inconspicuous, making it less prone to tampering or theft. In fact, no FirstDrops™ devices have been taken from the pilot hotels.

Through AI and machine learning, FirstDrops™ can detect a single drop of leakage and can predict when and where problems will occur. The software is currently being tested at Marriott and Hilton hotels. That testing will enable Möbius to refine the software’s algorithms and make it commercial-ready. While the startup will initially focus on the hospitality industry, there is strong interest from other markets such as dormitories, condominiums, rental properties and office buildings.

“We will be selling thousands of these devices in the short term. But ultimately, we aim to have our devices installed in a billion toilets. With fresh water becoming ever more expensive and scarcer, there is too much at stake for us to try and achieve anything less than this goal.” said Appel.